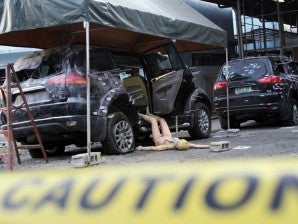 Investigators use mannequins inside the two sports utility vehicle at the “Atimonan encounter” last January 6, to get more information for the investigation at the National Bureau of Investigation grounds, Manila on Friday.
INQUIRER PHOTO / NIÑO JESUS ORBETA

SAN PEDRO, Laguna, Philippines—The families of at least two of the victims in the Atimonan, Quezon shooting are getting impatient with Malacañang’s decision to go slow in reviewing the recommendations that the Department of Justice and the National Bureau of Investigation submitted to the Palace over a week ago.

“I am also getting impatient. It has already been over a month now since the incident happened,” said Susan Consemino, the widow of Supt. Alfredo Consemino.

Consemino was among those killed in the questionable police-military operation in Atimonan,Quezon on January 6.

The report, described to be five inches thick, contained the results of the investigation of the National Bureau of Investigation (NBI).

The Atimonan operation, which targeted alleged crime-and-gambling lord Victor Siman, but which ended up killing not just Siman but 12 others, was partly funded by the Presidential Anti-Organized Crime Commission (PAOCC), according to the now suspended operation”s ground commander, Supt. Hansel Marantan.

“We hope (for the results) to come out within this week. We’ll just keep on praying and hoping that it turns up in favor of (the families),” Susan said in a phone interview on Monday.

The family of real estate broker and casualty Paul Quiohilag was also starting to grow impatient over the delay in the release of the results.

They also expressed their misgivings about Ochoa dipping a hand in the NBI report.

“The way they are handling it, parang sinasala (it seems the report is being filtered),” said Quiohilag’s sister, Rodelia Claridad.

“Why is this taking too long? Was the NBI report not good enough?” she asked.

The media earlier reported that the NBI recommended the filing of murder charges against those behind the Atimonan, Quezon, operation.

Earlier reports also said the NBI indicated that there was no shootout and that the crime scene was tampered with.