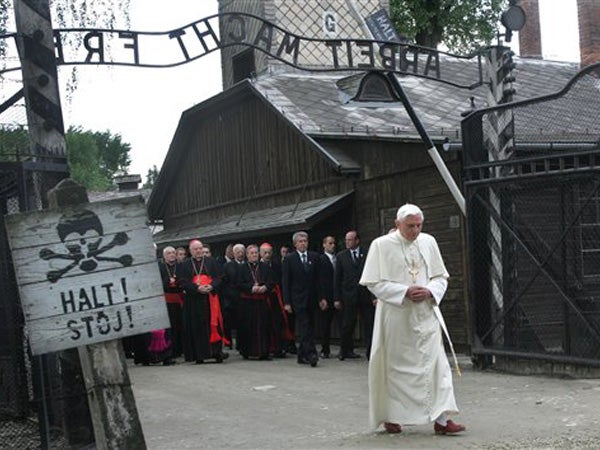 In this May 28, 2006 file photo, Pope Benedict XVI walks through the gate of the former Nazi concentration camp Auschwitz in Oswiecim, Poland, to pay his respects to the Holocaust victims. Sign at left reads “stop” in German and Polish. The world seems surprised that an 85-year-old globe-trotting pope who just started tweeting wants to resign, AP PHOTO/DIETHER ENDLICHER

The world seems surprised that an 85-year-old globe-trotting pope who just started tweeting wants to resign, but should it be? Maybe what should be surprising is that more leaders his age do not, considering the toll aging takes on bodies and minds amid a culture of constant communication and change.

There may be more behind the story of why Pope Benedict XVI decided to leave a job normally held for life. But the pontiff made it about age. He said the job called for “both strength of mind and body” and said his was deteriorating. He spoke of “today’s world, subject to so many rapid changes,” implying a difficulty keeping up.

“Usually a man who is entirely healthy in his early 80s has demonstrated his survival prowess” and can live much longer, said Dr. Thomas Perls, an expert on aging at Boston University and director of the New England Centenarians Study. The pope’s comments about strength of mind “does make one worry that he is concerned about his mind,” Perls said.

But aging alone is reason enough. It has driven many from jobs that used to be for life—Supreme Court justices, monarchs and other heads of state. As lifetimes expand, the woes of old age are catching up with more in seats of power. Some are choosing to step down rather than suffer long, public declines and disabilities as the pope’s last predecessor did.

Since 1955, only one US Supreme Court justice—Chief Justice William Rehnquist—has died in office. Twenty-one others chose to retire.

One in five US senators is 70 or older, and some have retired rather than seek new terms, such as Hawaii’s Daniel Akaka, who left office in January at age 88.

The Netherlands’ Queen Beatrix, who just turned 75, recently said she will pass the crown to a son and put the country “in the hands of a new generation.”