Pope Benedict XVI: The diehard traditionalist who resigned his post 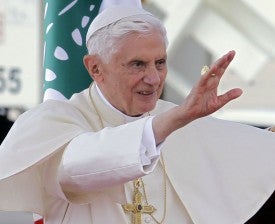 VATICAN CITY—Pope Benedict XVI, who on Monday announced his intention to resign this month, will be remembered as a staunch defender of Roman Catholic orthodoxy, a diehard traditionalist and a lightning rod for controversy.

The German intellectual succeeded the long-reigning and popular John Paul II in April 2005 aged 78 after serving nearly a quarter-century as the Church’s doctrinal enforcer, earning himself the nickname “God’s Rottweiler.”

The 85-year-old, who blamed his age for preventing him from continuing at the head of the papacy, will be the first pope to do so in centuries.

“I have had to recognize my incapacity to adequately fulfill the ministry entrusted to me,” the head of the world’s 1.2 billion Catholics said as he would step down on February 28.

Cardinal Joseph Ratzinger’s hardline approach, his nationality and his age were all seen as handicaps to his becoming pope, and Benedict had famously said in a 2010 interview that he would resign if he felt he could no longer carry out his papal duties.

As head of the Congregation for the Doctrine of the Faith and then as pope, he rejected the ordination of women and marriage for priests. He opposed homosexuality and communism and was never afraid of upsetting political sensibilities.

In 1984, he said “communist regimes which came to power in the name of the liberation are one of the disgraces of our times.”

Ratzinger has also attacked rock music, calling it “the expression of basic passions”.

He also reintroduced the long-discarded Latin mass under certain conditions.

Above all, Benedict will be remembered for a disastrous public relations record that got him into hot water with Muslims, Jews, gays, native Indians, Poles, AIDS activists and even scientists.

Memories are still fresh of the fury the German pope unleashed in the Muslim world with a speech in September 2006 in which he appeared to endorse the view of an obscure 14th-century Byzantine emperor that Islam is inherently violent.

The academic lecture sparked violent protests in several countries as well as attacks on Christian targets.

In 2009, the pope struggled to mollify Jews after he invited a breakaway ultra-conservative faction back into the fold of the Roman Catholic Church by lifting the excommunication of four bishops, including one who insists that no one died in Nazi gas chambers.

Just weeks later Benedict added AIDS activists to the list of groups he has angered.

On a trip to Africa, the region hardest hit by the AIDS pandemic, he said that condom use could be aggravating the crisis.

Born on April 16, 1927, in Marktl am Inn, in the predominantly Catholic southern German region of Bavaria, he was the son of a policeman.

Ratzinger gravitated gradually towards the priesthood, entering a seminary in 1939, the same year he was required to join the Hitler Youth movement.

He was ordained priest at the same time as his older brother Georg in 1951, and began teaching theology at Freising College in 1958.

Ratzinger went on from there to teach at several other German universities, notably in Bonn, Meunster and Regensburg.

The brilliant scholar caught the eye of Cologne Archbishop Joseph Frings, a cardinal who brought him to Rome to work as an advisor to the Second Vatican Council, hammering out modernisation reforms from 1962 to 1965.

Pope Paul VI named Ratzinger archbishop of Munich in 1977 and made him a cardinal the same year.

The four-year stint in Munich was his only real pastoral experience before he became pope.

It was during the 1978 conclave of cardinals to elect a successor to Paul VI that Ratzinger got to know Karol Wojtyla, the future John Paul II.

One of his first moves was to spearhead opposition to liberation theology, the movement with Marxist overtones that swept Latin America in the 1970s.

It focuses on Christ as the liberator of the oppressed and emphasizes the Christian mission of bringing justice to the poor and oppressed, particularly through political activism.

Instead, he shunned rock star status, once describing himself as “just the vicar” at the Roman Catholic Church’s periodic World Youth Days.

The Polish pope was greeted with enthusiasm bordering on hysteria at these events, and he did little to dampen down the adulation, to the consternation of some in the Church hierarchy.

The intellectual Benedict, an accomplished pianist, was a prolific writer.

Apart from three encyclicals, or instructions to the Roman Catholic flock, he wrote around 40 other works including a best-seller, “Jesus of Nazareth,” that contested political interpretations of Christ’s role.