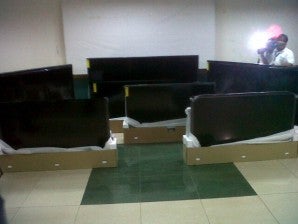 Customs Commissioner Ruffy Biazon said the television sets were confiscated from Listening in Styles stores at Shangri-La Plaza Mall and in Eastwood, Pasig after the stores failed to produce proof of payment of duties and taxes.

The BoC said that the counsel for Listening in Style submitted, in an offer of settlement,  claimed that the TV sets were sold to the home entertainment store by an oversees Filipino worker.