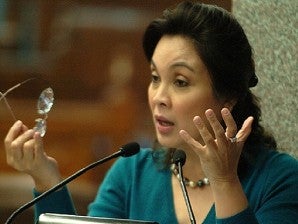 MANILA, Philippines–Senator Loren Legarda on Thursday urged employers to study the new Kasambahay Act to avoid any hassle that may result from non-compliance with the law’s provisions, particularly on pay scale and other benefits due to domestic helpers.

In a press statement sent to media, Legarda, principal author of Republic Act No. 10361, or An Act Instituting Policies for the Protection and Welfare of Domestic Workers, also warned employers against taking undue advantage of the law’s minimum wage provision.

Legarda said employers presently paying domestic workers more than the minimum wage might think of lowering their pay to the minimum set under the law to recover the added costs of paying for other benefits.

Legarda said the law, which was signed by President Aquino last January 18, is a major step in giving decent working conditions, fair compensation, and sufficient benefits to domestic workers.

One important provision which employers should be aware of, Legarda said, is the section mandating that employers and domestic workers enter into and sign an employment contract.

Legarda said the contract is important to bind both the employer and domestic worker and make them aware of their responsibilities to each other.

She also said that under the law, domestic workers are now entitled to benefits such

as SSS, PhilHealth, and the like. The law also states that if a household worker earns less than P5,000 a month, it is the employer who must shoulder the entire premium and contributions of the worker.

The Senator earlier said that according to the ILO Report titled Domestic Workers Across the World, a domestic worker in the Philippines worked 52 hours a week in 2010, the 7th longest work hours among the 39 countries with available data. The report also found that Filipino workers are paid less than half of the national average of incomes of the country’s total paid workers.

It was Legarda, as chair of the Senate Committee on Foreign Relations, who spearheaded last August the Senate’s concurrence in the ratification of ILO Convention 189, known as the Convention Concerning Decent Work for Domestic

Workers. The Philippines was only the second country to ratify the Convention.

“It is important that we treat our kasambahays as workers, not servants. This is a clear yardstick for equality in the country, and this heralds better things to come for other marginalized sectors,” Legarda stressed.

The law defines “kasambahay” as “any person engaged in domestic work within an employment relationship such as, but not limited to, the following: general househelp, nursemaid or ‘yaya,’ cook, gardener, or laundry person.