Duterte to anti-dynasts: Why not include Aquino? | Inquirer News
Close
menu
search

Duterte to anti-dynasts: Why not include Aquino? 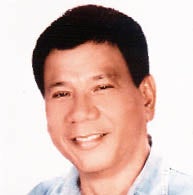 DAVAO CITY, Philippines—The tough-talking head of this city’s most powerful political family blasted an anti-political dynasty group for zeroing in on local politicians in their campaign against dynasties and sparing national figures, including President Benigno Aquino.

Vice Mayor Rodrigo Duterte, head of the Duterte family here, said the disqualification case filed against him and several other members of local political clans by the group Anti-Political Dynasty Movement (Andayamo) smacked of a double standard.

“Why not include Noynoy (President Aquino’s nickname)?” said Duterte.

The 32-page petition asked the Comelec to disqualify Duterte and members of the Villafuerte clan in Camarines Sur, Pineda clan in Pampanga and Gatchalian family in Valenzuela, Metro Manila.

Speaking at the Philippine Councilors’ League convention in Davao City on Wednesday, Duterte said: “Why only us? Why not include Noynoy?”

“For as long as there are free and honest elections, and the votes are counted squarely and honestly, you can’t do anything about it,” he added.

He said he found it strange that the group Andayamo spared the Estrada and Angara families from their campaign against dynasties. “How come?” he said.

Edgardo Angara is currently senator, but his son, lawyer Edgardo Jr., is running for senator under the Liberal Party. A sister of the incumbent senator is governor of Aurora province.

The anti-dynasty provision of the Constitution, he said, is the work of “an out of touch idealist.”

“There is no enabling law,” he said. “How can you say it’s a political dynasty or not? If you say it’s the lineage or based on the name, how about illegitimate children or mistresses?”

Duterte, who is running for mayor in May,  served over 20 years as Davao City mayor starting in 1988.

This time, his running mate is his son, Paolo, who is running for vice mayor and current chair of the Association of Barangay Captains.

The current mayor of Davao, Sara Duterte, a daughter of Rodrigo, defied her father’s wish to run for representative of the first district, dominated for years by the Dutertes’ political rivals, the Nograles clan.

Rodrigo said his son, Paolo, is qualified to run and “nobody can stop him from running.”