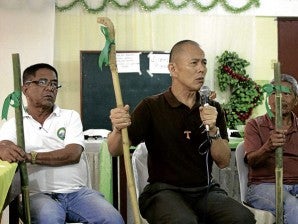 ACTIVIST priest Robert Reyes at the end of the two-day workshop on Green Shepherding, a movement composed of church, government and civic groups in the towns of Liliw, Nagcarlan and Rizal in Laguna, and in Dolores, Quezon, that promotes stewardship of communities and the environment. MARICAR CINCO

LILIW, Laguna—Members of religious and civic groups, police and local government units of Liliw, Nagcarlan and Rizal towns in Laguna and their neighbor, Dolores, in Quezon, took it upon themselves the stewardship of their communities and the environment by observing what they call “Green Saturdays.”

Activist priest Robert Reyes, who started the grassroots campaign called Green Shepherding, said the volunteers were ready to set off with their own ecological programs in their municipalities, clutching walking canes like the one he carried throughout the Takbundukan (Takbo para sa Kabundukan or Run for the Mountains).

The canes symbolize shepherds guiding their flock, of correcting man’s offenses, and of protecting the environment, Reyes, who started the campaign to save the mountains in 2011, said.

A rest for nature

The four municipalities agreed to observe the Green Sabbath or Green Saturdays, during which volunteers will devote at least an hour to promote the environment. In biblical teachings, the Sabbath refers to rest day, “so why don’t we also give nature a rest,” Reyes said.

On Dec. 15 last year, the group visited the Nagcarlan public market and discussed with the vendors a municipal ordinance that prohibits the use of plastics.

“It is a movement composed of anyone willing to be part of ‘green’ governance—that is ethical, compassionate, Godly and caring for the environment,” said Reyes, 57, a novice in the Franciscan order, who was given special permission to facilitate a seminar on waste management, climate change adaptation and environment conservation last year.

Green shepherd Rebecca Suiza, 65, a retired teacher, has been going around the market, carrying placards that read: “Take care of our environment” and “Keep it clean.”

“On one Saturday, Boy Scouts and Girl Scouts went hiking to a hill in Barangay Bunga … On their way, the students were given a lecture (by the volunteers) about environment conservation. They also discovered a small falls uphill, which the town never thought existed,” Suiza said. 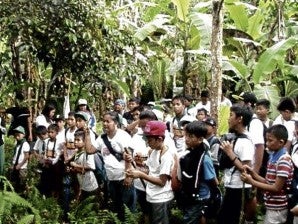 YOUNG Scouts are taught about environment conservation by the “green shepherds” during an uphill hike in Barangay Bunga in Nagcarlan town in Laguna. CONTRIBUTED PHOTO

She said government and private agencies also donated tree seedlings which had since been planted on public lots, such as the plaza and a church patio every Saturday.

“It’s very helpful to the community. Our mayor has also joined us and more are coming in (to be green shepherds). Our next target is to find an area where we can put up a mini forest or a (tree) nursery,” she said.

Rey Comendador, chair of Barangay Poblacion in Nagcarlan, said he hoped the movement would create a ripple effect across the country.

With the onslaught of Typhoon “Pablo” in Mindanao in December last year, Comendador said it was about time the government looked right into the heart of the problem even if it costs “strong, unpopular decisions to stop mining, logging, quarrying and monocropping in the mountains.”

He said the volunteers were planning to do this step-by-step, convincing households to defrost refrigerators on Saturdays, eat fresh instead of instant meals, save electricity or walk instead of driving around on vehicles.

The group plans to form next the “Bulilit Pastol” (small shepherds) among grade school and high school students, who would be knocking on doors during Saturdays to promote environment protection.

Reyes said he was helping Father Bernie (Bernardine Leonen, OFM), who was tasked by the bishop with starting a Church-led ecological program in seven parishes in Laguna. Leonen is an 80-year-old Franciscan formator who is equally passionate about environment preservation.

Although the idea was a biblical concept inspired by Jesus Christ who is “The Good Shepherd” according to Catholic Church teachings, the movement is open to all religions and its members are, in fact, working with Protestant church leaders in Lucena City to start “Green Shepherding” there, Reyes said.

He said the Church could not do this alone. “The mayor is a shepherd but not only to his flock but to all of God’s creations.”