Coastguard divers to make final assessment of damage on Tubbataha 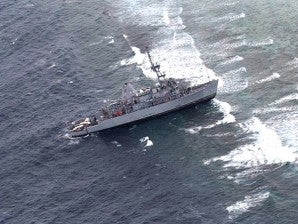 The USS Guardian, a US Navy minesweeper, is still stuck after running aground Tubbataha Reefs, a Unesco World Heritage Site in Sulu Sea, in this Jan. 17 photo released by the Armed Forces of the Philippines Western Command. AP

MANIA, Philippines – Philippine Coast Guard divers will make a “final assessment” of the USS Guardian’s damage on the Tubbataha Reef in the Sulu Sea once the grounded US Navy mine countermeasure vessel is removed from the Philippine marine park, the PCG spokesperson has told the Philippine Daily Inquirer.

Lt. Commander Armand Balilo on Wednesday also disclosed that “within the week, PCG divers may check out the reefs anew to find out the extent of the damage.”
“We’re told the ship’s rudder remains stuck (on the southern atoll of Tubbataha). But there’s a chance for our divers to conduct another operation this week. But again, it all depends on the weather. We’re hoping weather will improve,” he said.
In a phone interview, Balilo pointed out “current sea conditions in the Tubbataha Reef Natural Park are not favorable for rubber boats and other small boat operations.”
Citing reports from PCG vessels now near the reef, he said “malalaki ang alon, malakas ang hangin ngayon sa Tubbataha (big waves, strong winds hit Tubbataha).”
Balilo noted that the damage caused by the grounding of the Guardian “has reached 1,500 to 1,600 square meters, up from more or less 1,000 square meters two weeks ago.”
Two Coast Guard teams, composed of 14 divers in two rubber boats, checked out the reefs on Jan. 22, five days after the Guardian got stuck on the reef.
Angelique Songco, Tubbataha marine park manager, however, said early this week the Guardian had flattened about 4,000 square meters of the reef, declared a World Heritage Site in 1993 by the United Nations Educational, Scientific and Cultural Organization, or Unesco.
She said it was just an initial assessment with the damaged portion expected to get bigger once the Guardian is pulled out from the reef.
The Paris-based Unesco has expressed willingness to send a “team of experts” who will assess the grounded ship’s damage in Tubbataha.
Asked about the UN body’s offer, Balilo said “the task force has yet to take that up.”
On Monday, Rear Admiral Rodolfo Isorena, PCG commandant, flew to Puerto Princesa City to attend a task force meeting at the Western Command headquarters in the Palawan capital.
Aside from the Coast Guard, the DOTC-led body also groups the Navy, Philippine National Police, the non-government Tubbataha Reef Foundation and local government units.