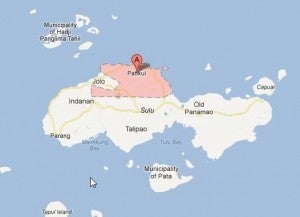 The hostilities started Sunday following the release of two Filipino television crew members in the jungles of Patikul.

Kidnap victims Rolando Letrero and Ramelito Vela were freed Saturday from the Abu Sayyaf camp in Patikul town, but the kidnappers held on to the victims’ companion, Jordanian journalist Baker Atyani.

Atyani and his two Filipino companions were declared “missing” in Jolo, Sulu, on June 13, 2012.

Freyra said among those killed in the fighting were seven MNLF fighters and 13 Abu Sayyaf members.

“Hundreds of civilians have already evacuated,” he said.

The MNLF, which signed a final peace agreement with the Philippine government in 1996, has been helping in the release of Abu Sayyaf hostages.

Apart from Atyani, the kidnap group are also holding Elwold Horn, 52, from Holland, and Lorenzo Vinciguerra, 47, from Switzerland.

In February 2012, Vinciguerra and Horn, both museum staffers in their respective countries and are involved in animal conservation, and their Filipino guide Ivan Sarenas, were abducted in Tawi-tawi.

Sarenas managed to escape from the hands of their captors.