‘Abu Sayyaf treated us like their children’—kidnapped TV crew 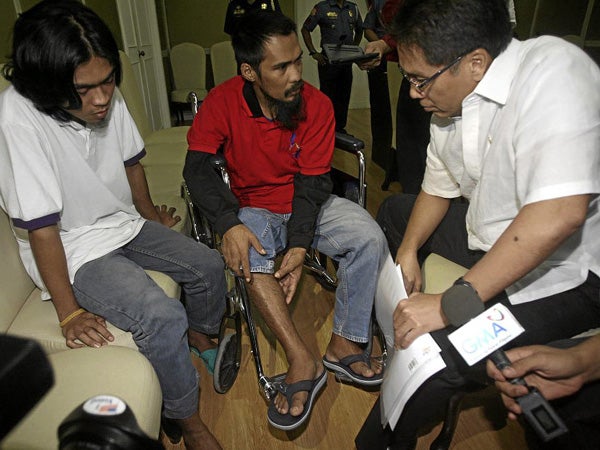 FREED Cameraman Ramelito Vela shows his injuries to DILG Sec. Mar Roxas, during a debriefing on Monday afternoon at Camp Crame with audio technician Rolando Letrero, after being freed by Abu Sayyaf gunmen on Saturday night. The Filipino crew members of Jordanian TV journalist Baker Abdulla Atyani were kidnapped by the al-Qaida-linked militants in June last year as they set out to interview the extremists in Jolo, Sulu. INQUIRER/ MARIANNE BERMUDEZ

MANILA, Philippines—The two TV crew members who were released by the Abu Sayyaf Group on Saturday night were taken as hostages but they were treated well like their children.

“Trato saamin doon parang anak. Mahusay ang alaga sa amin (We were treated like children. They treated us very well),” Ramelito Vela, one of the abducted Filipino cameramen told reporters in a press conference on Monday at Camp Crame in Quezon City.

The 38-year-old Vela was presented to the media with fellow victim, 23-year-old Rolando Letrero.

Vela said they weren’t hurt by any member of the bandit group, and were even allowed to eat food that they want to eat.

“Hindi kami sinaktan. Kung ano kinakain nila, kakainin naming (They didn’t hurt us. We eat what they eat),” he said, adding they were free to get fruits as long as they asked permission first.

Vela and Letrero were with Jordanian TV journalist Baker Atyani when they were abducted in Sulu on June 12, 2012. They were reportedly about to do a documentary on the al-Qaida-linked bandit group.

They were retrieved from the ANR Hotel in Jolo, Sulu around 10 p.m. Saturday.

Atyani’s whereabouts is still being monitored, but Vela said they were separated from Atyani just five days after they were abducted.

He said they moved to different places and were guarded by different ASG members from time to time.

He estimated there were about 400 ASG members.