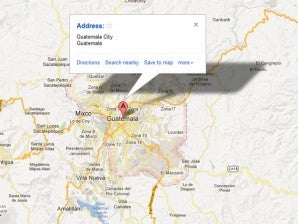 GUATEMALA CITY— Some 35,000 motorcyclists roared through the streets of Guatemala City Saturday for an annual pilgrimage to the Cristo Negro—the shrine of the Black Christ—one of this country’s most venerated icons.

The riders, many toting wives or children on their backs, will cover 195 kilometers (120 miles) from the center of the capital Guatemala City, to the town of Esquipulas, home to the basilica of the same name where the icon is housed.

Once referred to as the “spiritual center of Central America” by Pope John Paul II, the Basilica of Esquipulas attracts thousands of pilgrims each year to to pay homage to the Black Christ statue, which was carved in 1595.

It is seen as so much a part of Guatemala’s heritage that a postage stamp has been minted to commemorate the pilgrimage.

President Otto Perez, greeted organizers of the event wearing a Harley Davidson biker jacket and wished the riders a safe journey. Each year there are some fatal accidents during the ride.

To reduce the risk of accidents, authorities have mounted relief stations at various stages along the route.

John Paul visited Esquipulas in 1996, during his second of three visits to Guatemala.