Stop at ‘zebra lanes’ or else … 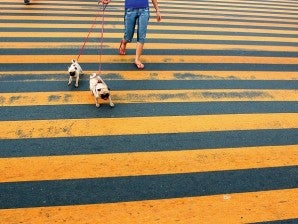 RIGHT OF WAY Pedestrians—even the four-legged kind like these two pugs crossing a Manila street—should be kept safe from undisciplined drivers. RICHARD REYES

Fed up with drivers who won’t stop to let you pass on the so-called “zebra crossings” on the street?

A proposed measure that penalizes such motorists and has the potential to start a much-needed “change of culture” on Metro Manila roads is gaining ground in San Juan City.

The city council last week passed on second reading a draft ordinance that requires all drivers to step on the brakes even when only one person is crossing the street using the zebra lane.

Authored by Councilor Angelo Agcaoili, Ordinance No. 1-2013 is up for third and final reading tomorrow.

According to Agcaoili, it is mainly aimed at drivers who apparently regard pedestrian lanes as mere “decorations” on the road. The worst of these drivers, he said, would even “blow their horns” at people trying to cross the streets at these designated lanes.

“This culture has to change,” said Agcaoili, a lawyer. “Our pedestrians must be encouraged to use our pedestrian lanes, knowing that vehicles will stop.”

According to the councilor, his pet legislation was prompted by his own unpleasant experience with such drivers. He was already crossing the road halfway near the Greenhills Shopping Center one day, he recalled, when two private vehicles whizzed by and almost hit him.

He said the measure, once passed, will primarily ensure the safety of pedestrians.

He argued that since pedestrians face sanctions under the city’s traffic code for jaywalking, for example, it is only fair for authorities to impose corresponding penalties on undisciplined drivers.

Under the proposed measure, a driver of any motor vehicle who fails to stop at a pedestrian lane where at least one person is already crossing will pay a fine of P1,000 for the first offense and P2,000 for subsequent offenses.

Fines that go unpaid shall carry an “interest of 1 percent a month” but shall not go higher than P5,000.

The license of the erring driver will be confiscated and will not be returned until the fine is paid.

The measure, however, maintains that pedestrians cannot invoke the rule if motorists have the go-signal from traffic lights or officers to proceed.

The local police and the city’s traffic and park management office are being tasked to enforce the measure.