Hornbills in the city: Clock ticking on nature’s timekeeper 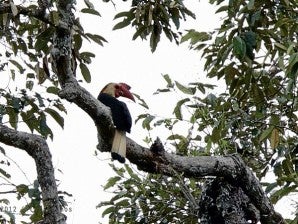 Marlyn Fabreag, a native Samareña who works in Manila, fondly recalled how hornbills, known to locals as the kalaw, helped her family keep track of their daily activities in the province.

“The kalaw would first make loud calls at 4 a.m., signaling the start of our day,” she said. “At 9 a.m. we would again hear the familiar kaw-kaw, which reminded my father and his fellow farmers working in the field to take a break and drink salabat (ginger tea).”

The hornbills would then make their trademark raucous calls at 11:30 a.m., which served as a signal for lunchtime, and again at 3 p.m., for snacks or merienda. “Their last calls would be at twilight, usually before 6 p.m. We knew then that it was time to go home and call it a day,” she recalled.

The stuff of rural childhood memories, the forest-dwelling, seed-sowing hornbill is considered a “natural timekeeper.”

Today, however, there are signs even in the cities that the clock is ominously ticking on the endangered bird.

Last year, there was a “surprise” sighting of a female tarictic or hornbill behind Quirino Grandstand at Rizal Park in Manila. More recently, a few more hornbills were spotted at La Mesa Ecopark in Quezon City.

Symptom of a problem

Such urban sightings are a rarity, according to Michael Lu, president of the Wild Bird Club of the Philippines (WBCP). “Since hornbills are forest birds, one won’t naturally find them in a city with few trees,” he said.

It may be a bird watcher’s delight, but the sudden appearance of hornbills in Metro Manila is a symptom of a serious problem: The diminishing forest cover across the country due to logging and agriculture.

Of that total number, “10 are found only in the Philippines,” Lu noted. “For a country the size of ours, that is astounding. This is an indication of the level of biological richness of the Philippines and the global significance of its wildlife.”

Yet seven out of the 10 Philippine species are now in danger of extinction. Two are considered critically endangered, according to the WBCP.

In a 2005 paper, researchers William Oliver and Roger Wilkinson said “this dire situation bestows on the Philippines the dubious distinction of having the most number of threatened hornbills in the world, and two of the most endangered.” 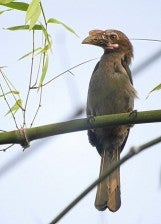 They were referring to the Rufous-headed Hornbill and the Sulu Hornbill.

“The Philippines is also the first country to record a human-induced extinction of a hornbill subspecies, a race of the Visayan Hornbill found in Ticao Island in Masbate province,” Oliver and Wilkinson said.

It is for this reason that the Philippines has been chosen as the venue for the 6th International Hornbill Conference.

Farmers of the forest

To be held in Makati City from April 24 to 26, the conference is being organized by the WBCP, the HRF and the Philippine Biodiversity Conservation Foundation. A first in the country, it also is one of the WBCP activities marking the club’s 10th anniversary.

“The conference is an opportunity to draw attention to the plight of hornbills in the country. It is also a timely opportunity for the Filipino people to know more about hornbills in our disappearing forests,” said Anna Maria Gonzales, who chairs the organizing committee.

With the theme “Hornbills and Caring Communities: Helping Forests to Thrive,” the conference opens on April 24 with an exhibit at Ayala Museum. Lectures follow on April 25 and 26 at Asian Institute of Management.

Gonzales said hornbill researchers, conservation scientists, ornithologists, environmentalists, biology students, bird watchers and conservation breeders from all over the world are expected to attend. The exhibits and lecture sessions are open to the public.

The keynote speakers are HRF founder Dr. Pilai Poonswad and Dr. Juan Carlos Gonzalez of the University of the Philippines.

“Hornbills are called ‘farmers of the forest’ because they scatter seeds on the forest floor and help forests to thrive,” said Gonzalez, an assistant professor at the UP Los Baños Institute of Biological Sciences

“Although many animals have the ability to distribute seeds, hornbills are among the most efficient because they travel far and wide to find fruit-bearing trees,” he said.

They also do not damage the seeds, unlike some mammals that crush the seeds in their mouth or other birds that mash them in their gizzards, Gonzalez noted.

Perhaps the most well-known of the local hornbills is the kalaw or the Rufous Hornbill (a species different from the critically endangered Rufous-headed Hornbill), which lives in various islands in Luzon, as well as in Samar, Leyte and Bohol provinces in the Visayas, and in mainland Mindanao.

“Some indigenous cultures welcome hornbills in their communities and regard them as natural timekeepers. (They are) often preferred to the farmyard rooster,” the UP professor said, adding that a hornbill’s call from its communal roosts at sunrise and sunset is audible within 1.5 kilometers.

In Samar, the kalaw is referred to as orasan (clock). During the Spanish colonial period, these birds were also called reloj del monte or clock of the mountains , Dr. Gonzalez said.

Aside from Rizal Park and La Mesa, bird watchers are expecting hornbills to turn up in the Las Piñas-Parañaque Critical Habitat and Ecotourism Area.

This is because other forest birds like the Philippine Cuckoo-Dove, Coleto, Philippine Bulbul, and Spotted Imperial Pigeon have already made “unexpected appearances” at that site off Manila Bay, Lu said. They were apparently drawn to the sanctuary since it is along their migration route between the Palay-Palay forest in Cavite province and the Bataan National Park in Subic.

If forests continue to shrink, the sanctuary may become even more critical to the survival not only of water birds but also forest flyers like the hornbill, Lu said. “If a hornbill can show up at Rizal Park, the probability of seeing it (at the Las Piñas-Parañaque sanctuary) is even higher.”