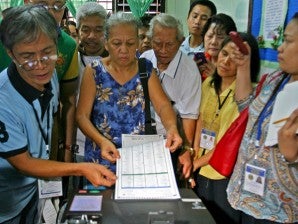 A woman casts vote during the mock election at Epifanio de los Santos Elementary School in Manila with 100 days remaining before the 2013 midterm election.

At least in the mock elections that the Commission on Elections (Comelec) conducted Saturday, Filipino voters got the chance to choose who among their Hollywood and celebrity favorites to elect as senators.

Comelec Chair Sixto Brillantes Jr. said the poll body used the names of Hollywood stars, instead of those of actual candidates, to avoid controversy.

In the mock polls for the 2010 elections, the Comelec used the names of Filipino heroes. National hero Jose Rizal won that vote.

“On a lighter note, Tom Cruise, Mariah Carey and (the late American astronaut) Neil Armstrong are among the senatorial candidates in the mock elections,” Brillantes announced in his Twitter account.

A copy of the ballot for the mock polls showed Armstrong running under the leftist party-list group Bayan Muna, Carey under the Partido Magdiwang, and Tom Cruise under the Lakas-CMD.

The other choices for the voters included crooner Michael Bublé, who was running under the Anakpawis peasant group, Cameron Diaz (Laban ng Demokratikong Pilipino), and Paul Anka (under the rightist party-list group Anad).

For party-list groups, the Comelec used the names of local rock bands like Itchyworms and 6 Cyclemind.