Marcos sins, victims’ woes to be taught in schools 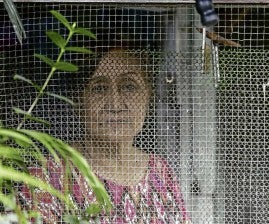 JAILED TWICE One of the victims of martial law abuses, Carmencita Florentino, 64, is shown peering through the screen door of her home in a poor area of Tatalon, Quezon City. More than 9,000 victims stand to receive compensation from the $246-million fund the government recovered from the Marcos wealth. Florentino was jailed twice, in 1977 and 1978. Bullit Marquez/AP

So the nation will remember not to forget, a bill that recognizes for the first time that the Ferdinand Marcos dictatorship committed atrocities against Filipinos also mandates the teaching in schools of the abuses inflicted on its opponents and the heroism of those who fought the regime.

The bill, ratified by the two chambers of Congress on Monday and awaits the signing into law by President Aquino, creates the Human Rights Violations Victims’ Memorial Commission and lays down guidelines for monetary reparations to the victims from a P10-billion fund out of the ill-gotten wealth recovered from Marcos.

The memorial commission is tasked with collaborating with the Department of Education and the Commission on Higher Education (CHEd) “to ensure that the teaching of martial law atrocities, the lives and sacrifices of [victims of human rights violations] in our history are included in the basic, secondary, and tertiary education curricula.”

The memorial commission will also establish, restore, and preserve a memorial, museum, library and compendium in honor of the victims as outlined in the policy statement of the bill, called The Human Rights Victims Reparation and Recognition Act of 2013.

The bill states: “It is hereby declared the policy of the state to recognize the heroism and sacrifices of all Filipinos who were victims of summary execution, torture, enforced or involuntary disappearance and other gross human rights violations committed during the regime of former President Ferdinand E. Marcos covering the period from Sept. 21, 1972, to Feb. 25, 1986, and restore the victims’ honor and dignity.”

The memorial commission will be run by a board of trustees led by the Commission on Human Rights chair, and composed of the secretary of education, heads of the National Historical Commission, the CHEd, the National Commission on Culture and the Arts, and the University of the Philippines-Diliman Main Library.

The bill also creates the Human Rights Victims’ Claims Board, an independent and quasi-judicial body tasked with receiving, evaluating, processing and investigating the applications for monetary compensation.

The board is also called upon to draw up a “Roll of Human Rights Victims,” regardless of whether they sought reparation or not, to be displayed in government offices. A compendium of the victims’ sacrifices will also be prepared and posted on the Internet, the bill states.

The President will choose the nine members of the board, and human rights organizations may submit a list of nominees.

The board must complete its work within two years from the effectivity of implementing rules and regulations concerning the measure.

A martial law victim may file an application for reparation with the board within six months from the effectivity of the implementing rules, according to the bill. Failure to do so within that period will be deemed a waiver.

For the victims who are deceased, incapacitated, or missing due to enforced disappearance, their legal heirs or representatives may file an application for reparation on their behalf.

Any application may be opposed if the challenge is filed within 15 days from publication of the official list of eligible claimants. Those found by the board to have filed fraudulent claims will be prosecuted.

The bill also states that the 9,539 plaintiffs in the litigation against the Marcos estate in a Hawaii court will be given the conclusive presumption that they are human rights violations victims.

To be given the same presumption are those victims recognized by the Bantayog ng mga Bayani Foundation.

In determining compensation, the board will use a system assigning points—from one to 10—to each claimant depending on the severity of the abuse suffered.

To be awarded one to two points are those who suffered any force or intimidation leading to their voluntary exile abroad; and those who suffered force, intimidation or deceit causing the unjust or illegal takeover of a business, confiscation of property, detention of owners, or deprivation of livelihood, including those caused by the Marcoses and their immediate relatives and cronies.

Compensation will be made within 30 days after the board approves with finality each eligible claim and publishes it.