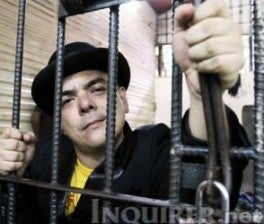 President Aquino believes the leadership of the Catholic Church should forgive activist tour guide Carlos Celdran but he was quick to point out he was not necessarily in favor of his rather unorthodox methods.

“Well, I may sympathize with Mr. Celdran’s position—perhaps the methodology during a Mass we don’t agree with it,” said Mr. Aquino in an ambush interview after he delivered a speech at the National Economic and Development Authority in Pasig City Tuesday.

Celdran was found guilty of offending religious feelings and was sentenced to up to a year in prison by a Manila Metropolitan Trial Court on Monday.

Dressed like the national hero Jose Rizal, Celdran had stood before the main altar of the Manila Cathedral during an ecumenical service last year and, yelling, raised a placard with the name “Damaso” on it—disrupting the service and earning the ire of the clergy and the faithful.

Damaso is the villain-priest in Rizal’s novel “Noli Me Tangere,” which depicted the abuses of the Spanish friars during the time the Philippines was a colony of Spain.

Asked if he had any thoughts about the possible implication of the court decision on the practice of the freedom of speech, Mr. Aquino replied: “Let’s look at all the details first. Again, I saw it (decision) in the papers. I haven’t had the occasion to read the decision. I’m not afforded (a copy of) decisions before they are promulgated. So we have to secure the copy (first).”

But Mr. Aquino pointed out that freedom of expression had its limits too.

“Let’s see if there are implications. Of course, there is a constitutional provision on freedom of speech, but our rights have limitations as to what we can say, and where we can say it,” he said.

The clergy, however, had long forgiven Celdran but the court has spoken and they could only respect its decision, Catholic Bishops’ Conference of the Philippines (CBCP) president and Cebu Archbishop Jose Palma said at a church forum in Intramuros, Manila, on Tuesday.

“We can only love and forgive but the decision of the court is its verdict on the matter … we just say amen to the decision,” said Palma.

Palma was asked his thoughts on the guilty verdict handed down by MTC Judge Juan Bermejo Jr. on Celdran for violation of  Article 133 of the Revised Penal Code, or offending religious feelings.

Asked if the CBCP would appeal to the court to let Celdran off the hook, Palma replied: “We respect the decision of the court. It’s not for me to oppose.”

He also could not say if the penalty meted out to Celdran was harsh since he had not read the decision.

“I don’t know yet because we just came out of the [plenary] session and I just saw it on TV. I just know the court has decided,” he said.

The CBCP had nothing to do with the case that was filed against Celdran. It was the Manila Cathedral, under the jurisdiction of the Archdiocese of Manila, that pursued the case.

Celdran had mounted his protest against the Church’s opposition to the reproductive health bill then pending in Congress.

The measure became law last December when it was signed by Mr. Aquino without fanfare to avoid exacerbating the rift between the administration and the Catholic Church over his support of the bill.