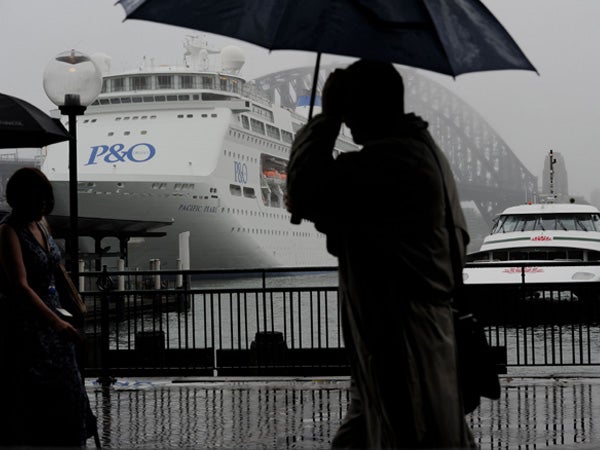 BRISBANE, Australia—Deadly floodwaters were sweeping down Australia’s east coast Tuesday, with Queensland’s state capital Brisbane bracing for its river to peak as other towns waited anxiously as waters rose.

Four people have died so far in the violent weather, including a three-year-old boy who succumbed after being hit by a falling tree in Brisbane, while more than 2,000 homes have been flooded in Bundaberg alone.

Queensland Premier Campbell Newman said Bundaberg, a coastal town about 360 kilometres (220 miles) northwest of Brisbane which has been hit by tornadoes in the wake of ex-tropical cyclone Oswald, was a key concern.

Hundreds of people have been rescued from their rooftops in the town, many by helicopter, with Black Hawks operating until midnight using night vision to pluck them to safety as floodwaters rapidly ripped around them.

“There may still be people in there and we have to get them out,” Newman said.

“We are concerned about houses being lifted off their stumps and swept away. People cannot stay in north Bundaberg.”

“We are seeing things that aren’t precedented, we have exceeded all records here,” he told Sky News.

“It’s a very stressful time for everyone.”

The floods, caused by torrential rains which came in the wake of Oswald, come just two years after a devastating deluge covered much of Queensland, leaving more than 30 people dead and bringing Brisbane to a standstill.

But Newman said with Ipswich, a town west of Brisbane which was badly affected in 2011, escaping the worst overnight he was hopeful that the river peak in the state capital may not be as bad as at first feared.

“That bodes well for the predicted flood peak today in Brisbane, which is meant to happen before midday at 2.6 meters,” Newman said.

“I’m just speculating here, but we might see a flood level no greater than that.”

As the current weather system moved south, towns in adjoining New South Wales state are on alert, with evacuations ordered in Grafton.

Wild weather has ripped trees up and caused dangerous surf in Sydney.