64 young authors make it to pages of ‘Young Blood 4’

The selection process was described as “brutal,” “dramatic and strict,”  but in the end, 64 young authors made it to the pages of the Philippine Daily Inquirer’s fourth and latest volume of “Young Blood.”

“Young Blood 4,” launched on Sunday, is a compilation of essays that tell “the Filipino story through the eyes of the youth,” according to one of the books’ editors, Ruel De Vera.  The essays were originally published in the Inquirer’s Young Blood section.

De Vera described the selection process as a “a brutal and long discussion,” as the editors went over essays published over six years, from 2005 to 2011.

His fellow editor, JV Rufino, head of Inquirer Books which published the latest compilation, recalled the selection process as being “dramatic and strict.”

Among the contributors to “Young Blood 4” is Kabataan Rep. Raymond Palatino who holds the distinction of having two essays in the compilation. 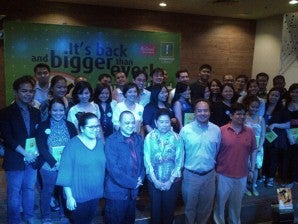 His first story, about how he and his wife met, was published in February 2007 when he was just 27. His second essay, published in January 2010, recalled his experiences as one of the youngest members of the House of Representatives.

“I’m grateful for the honor,” Palatino said.  Now 33 and happily married with two children, the party-list representative said he’d like to share his love of reading and writing with his children.

Also among the contributors is Jessica Marie Robredo, daughter of the late Interior Secretary and Ramon Magsaysay Awardee Jesse Robredo, who was recently chosen “Filipino of the Year” by the Philippine Daily Inquirer.

Robredo’s story, which was published in March 2007 when she was still 15, recounted how her father, then mayor of Naga City, had inspired her “to make a difference.”

During the launch, the young Robredo spoke of her father’s “greatness of spirit” and how he “became a man for others [and] served others with integrity.”

Robredo’s story had previously won the grand prize in the high school category of the 2003 Ramon Magsaysay Student Essay Competition.

In introducing the book, editor Rosario Garcellano described the selected essays in the compilation as “display(ing) not only passion and sorrow, but also compassion and commitment—hardly the stuff of the flighty, the jejune, or the goofing off.”

“Young Blood 4” is available in major bookstores, and will soon be accessible as an e-book, the first ever in the “Young Blood” series, Rufino said.

Opinion Editor Rosario Garcellano said in the introduction of the book that all the essays compiled in the book “display[ed] not only passion and sorrow but also compassion and commitment–hardly the stuff of the flightly, the jejune, or the goofing off.”

The book is available in major bookstores for P375.