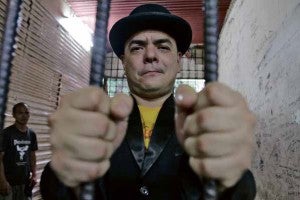 NO THEATRICAL SCENE Tour guide Carlos Celdran is put behind bars in this file photo taken in 2010 when he was arrested for his “Damaso” act. INQUIRER PHOTO

It was the kind of court decision that—for some—could only please Padre Damaso.

A Manila court on Monday found tour guide Carlos Celdran guilty of offending religious feelings when, dressed like Jose Rizal, he stood in front of the main altar of Manila Cathedral during an ecumenical service, shouted and raised a placard with the word “Damaso” on it.

In an eight-page decision, Metropolitan Trial Court Judge Juan Bermejo Jr. sentenced Celdran to a minimum of two months and maximum of one year in prison for violating Article 133 of the Revised Penal Code.

Celdran was protesting against the Church’s opposition to the reproductive health (RH) bill then pending in Congress. The measure was passed into law last year.

Damaso is a hated character in Jose Rizal’s novel “Noli Me Tangere,” which depicts the abuses of  friars in the years of Spanish rule.

Judge Bermejo cited a law which penalizes “anyone who, in a place devoted to religious worship or during the celebration of any religious ceremony, shall perform acts notoriously offensive to the feelings of the faithful.”

An act is considered offensive to a religion when it is “directed against religious practice or dogma or ritual for the purpose of ridicule, as mocking or scoffing at or attempting to damage an object of religious veneration.”

Celdran, who was in court with his wife Leny to hear the verdict, said his legal team was preparing to appeal the decision, adding  it set a “bad precedent” and that he was ready to take his fight all the way to the Supreme Court.

“The time of Damaso is not yet over,” Celdran told the Philippine Daily Inquirer in Filipino. “As a matter of fact, Damaso is flexing his muscles to get back [into the picture].”

Also a theater artist and a painter, Cedran has been known to use his celebrity status to take on social issues.

“I am afraid for the Filipino people because this is a precedent that, when you question the Catholic institution, they can bring you to court and put you in jail,” Celdran, who is out on bail, said. “I am lucky that I have legal support but what about other Filipinos who don’t?”

Stay away from politics

Celdran said he was not surprised by the court’s decision and that he suspected it was payback for his vocal stance against the Church position on the RH measure.

Bermejo also cited a 1939 Supreme Court decision stating that the determination of an act’s offensiveness was “a question of fact which must be judged only according to the feelings of the Catholics and not those of other faithful ones.”

Prosecution witnesses testified that at 3 p.m. on Sept. 30, 2010, inside the Cathedral-Basilica of the Immaculate Conception, Celdran interrupted an ecumenical prayer when he went near the altar and flashed the “Damaso” placard.

Dressed like Rizal, he shouted that the Church “should stop getting involved” in politics.

The incident occurred during the second anniversary of  the “May They Be One Bible Campaign” and the launch of the “Handwritten Bible,” a project of the Philippine Bible Society (PBS), with a two-part program—the ecumenical prayer and the Holy Mass.

The occasion was attended by then Manila Archbishop Gaudencio Cardinal Rosales, the papal nuncio, other bishops, PBS members, and military and police officers, witnesses said.

Fr. Oscar Alunday, executive secretary of the Episcopal Commission for Biblical Apostolate (Ecba), said the incident was “insulting, aggrieving, and an intrusion of the holy liturgical worship.”

Witness Angelito Cacal, a staff of Ecba, said he was “surprised, offended and angry since he did not expect such incident will happen considering that it was a solemn celebration.”

“The positive declaration of the witnesses for the prosecution and the circumstances surrounding the incident are sufficient to satisfy the quantum of evidence needed for a criminal conviction,” the court decision said.

Celdran said the verdict would not slow him down because he believed  the decision violated freedom of speech, human rights and the separation of Church and State.

“There was a case in the 1950s but it was never taken to trial because that law was never taken seriously. Now, in the age of technology, of the mobile phone, Damaso is still strong,” he said.

Celdran, who has apologized to the Archdiocese of Manila,  said the Church leaders had forgiven him in the name of the Lord but not on the earthly realm.

“As far as they are concerned, I can go to heaven, but I have to go to jail first,” Celdran said.

“I am not authorized to give a statement. I might get sanctioned. Please take pity on me,” Cerbo told reporters. He directed the media to the Archdiocese of Manila’s communications office for an official comment.

In a statement, Human Rights Watch said: “This is a setback for free speech in the Philippines, which prides itself on being a democracy. This verdict should be reversed. Nobody should be jailed for voicing out an opinion or position, especially on a subject that concerns the lives of millions of Filipino women and mothers.” With reports from Jocelyn R. Uy, Leila B. Salaverria and Inquirer Research