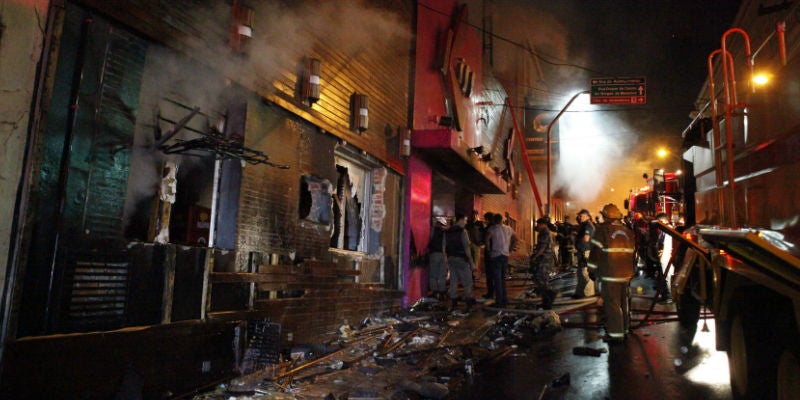 Firefighters work to douse a fire at the Kiss Club in Santa Maria city, Rio Grande do Sul state, Brazil, Sunday, Jan. 27, 2013. Firefighters say that the death toll from a fire that swept through a crowded nightclub in southern Brazil has risen to 180. Officials say the fire broke out at the club while a band was performing. At least 200 people were also injured. AP Photo/Agencia RBS

SANTA MARIA, Brazil – At least 233 people died Sunday when a fire gutted a nightclub packed with students and killed merry-makers desperately clamoring to get past blocked doors, police and survivors said.

Shocked survivors, mostly young adults in the southern college town of Santa Maria, described a frantic rush to the exits as flames swept through the club, with scores of people getting trampled and passing out from smoke inhalation.

“It was sheer horror. I lost a very dear friend. The emergency exits did not work, and then I lost my friend in the confusion,” young dentist Mattheus Bortolotto told local television Band News.

“Then a girl died in my arms. I felt when her heart stopped beating. I had only ever seen something like that in the movies.”

Even outside, he said, “the metal barriers they used to keep people in line on their way in, ended up blocking people from getting out. People were bumping into each other, crushing each other, falling down.

“And the people who were at the back of the club were simply trapped.”

“As a sign of mourning due to the tragedy in Santa Maria, Federal District governor Agnelo Queiroz, who is deeply saddened, has decided to push back the event that had been scheduled for National Stadium,” his office said.

Another 131 people were injured, and the death toll from the inferno climbed rapidly as firefighters pulled bodies from the charred remains of the “Kiss” club, believed to have been packed with hundreds of revelers.

Health Minister Alexandre Padilha told a news conference the government’s priority was “saving the lives that we still can save.”

The tragedy appeared to be the deadliest such blaze in more than a decade, since a fire at a shopping center and discotheque in the central Chinese city of Luoyang killed more than 300 people in 2000.

Reports said the fire broke out after 2:00 am (0400 GMT) when the nightclub was hosting a university party featuring a rock band using pyrotechnics, but authorities have yet to offer an official explanation.

Survivor Michelle Pereira said the blaze broke out when a band member lifted a firework into the air, setting the ceiling on fire. The flames quickly engulfed the entire room.

“Everyone was pushing and shoving… The fire started out small, but in a matter of seconds it exploded,” Taynne Vendruscolo, another survivor, told reporters. “Those who were close to the stage could not get out.”

Young men helped evacuate the wounded as firefighters doused the blackened shell of a red brick building with water and used sledge hammers to punch holes in the walls to get people out faster.

The bodies were taken to a sports stadium that was blocked off by police to keep grieving family members from streaming in.

Family members and survivors, many of them sobbing and some with soot-blackened faces, gathered outside in the hope of getting news of their loved ones. The town is home to the Federal University of Santa Maria.

Brazilian President Dilma Rousseff cut short a visit to Chile, where she was attending a European and Latin American summit, to head to Santa Maria and oversee the response to the tragedy.

“It’s a tragedy for all of us, and I cannot continue here at the summit, because my priority is the Brazilian people,” the visibly emotional leader told reporters traveling with her in Santiago.

She said federal and local authorities are mobilizing “all resources, so that we do not just recover the bodies but also support families at this time and provide very efficient care to the injured.”

Argentina’s transplant center INCUCAI said it would be sending banked skin to help Brazil with a likely greater need for burn-related skin grafts.

The tragedy recalled a 2003 blaze in a nightclub in the US state of Rhode Island that killed 100 people and another in Buenos Aires in 2004 that killed some 200, both blamed on faulty safety measures.