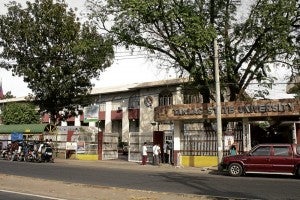 In a Jan. 8 order that TSU president Priscilla Viuya, former TSU president Dolores Matias and eight other officials received last week, Deputy Ombudsman Gerard Mosquera directed them to file within 10 days counteraffidavits for the preliminary investigation of the case. Adoracion Agbada, director for Evaluation and Investigation Bureau-B, signed the order on behalf of Mosquera.

Another order required the respondents to answer an administrative case stemming from the same complaint.

Viuya said she, Matias and the eight TSU officials have asked for a two-week extension to file their counteraffidavits.

They said that for every student enrolled in the TNE, the Hong Kong Lifelong Education Organization (HKLEO) paid TSU fees worth only a semester of college education in the Philippines.

It takes two to three years to finish a master’s degree and three to four years to complete a doctorate.

The TSU offered the TNE in 2004, 15 yeas after former President Corazon Aquino signed a law that converted it into a university in 1989.

In an interview, Viuya said TSU was “not disadvantaged” because the board of regents approved the TNE. Matias and HKLEO signed this in 2004.

She said the board of regents’ approval was sufficient since this was chaired by Commissioner Nona Ricafort of the Commission on Higher Education (CHEd).

HKLEO was established in 1998 and its mission is to “open the doors for education exchanges among neighboring Southeast Asian nations and other overseas universities and lead the way in having a strong relationship between educational institutions.” It runs the Lifelong College and Hong Kong Lifelong Learning Education Center.

In their complaint, Nool and Dizon said the TNE should have been registered with the CHEd and regulated under CHEd Memorandum Order No. 2 Series of 2008 that adopted the code of practice set by the United Nations Educational, Scientific and Cultural Organization to ensure quality education.

Viuya said HKLEO obtained registration from Hong Kong authorities for the degrees that TSU offered. The HKLEO website shows photographs of graduation rites officiated by Viuya and other TSU officials in its Hong Kong campus.

Nool and Dizon said some courses offered abroad are not offered at TSU.

Viuya said the TNE has graduated more than 1,000 students who completed the courses through an alternative learning system.

The alternative learning system consists of learning through modules, face-to-face learning for a certain period, online consultations and preparation and defense of a thesis. TNE students hold classes at HKLEO campus.

But no theses had been filed in the TSU library or scrutinized by the academic council, said Nool and Dizon.

ACT Teachers Rep. Antonio Tinio has asked the CHEd, Commission on Audit and the Office of the Ombudsman to investigate the graft complaints by Nool and Dizon as well as by Glenard Madriaga, former TSU vice president for research, extension and development.