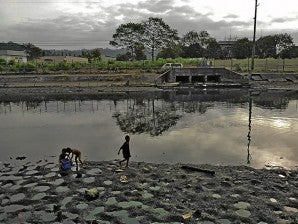 OLONGAPO CITY—Fish along the Kalalake River here floated dead on Tuesday night, providing free food to residents who live beside the river that empties into Subic Bay.

But authorities are looking into allegations the fish kill was due to Subic firms operating near the river.

Kalalake Village head Randy Sionzon said manufacturing facilities within the Subic Bay Freeport which operate near the river allegedly “pour their waste into the drainage canals that lead to here.”

“We’ve been complaining about this to the Subic Bay Management Authority Ecology Center since last year,” he said.

Lynda Vergara, 65, said her household as well as other families here have been harvesting dead fish since Tuesday night. “It smells of oil. We would put salt on the fish, but you can’t take the taste of oil away,” she said.

Dante Ramos, head of the Olongapo City environment sanitation and management office, warned residents against eating the dead fish. He said water samples need to be taken to determine the cause of the fish kill, the first in the city.

The fish kill extended to other villages. Pag-asa village head Jimmy Pasag said residents told him tilapia turned belly up in their part of the river. Sionzon claimed that manufacturing firms in the Subic Industrial Park may be responsible for “the discharge of oil, grease, sometimes even paint, and other chemicals in the water.”

He said domestic sewage from Olongapo City households also flow into the river. He said the city government “regularly sends cleaners here who pick up the garbage floating in the river.”

“But there’s really nothing they can do about the chemicals [in the water],” village officials said.

The Inquirer learned that the Subic Water and Sewerage Co. (Subicwater), which services the free port’s locators, also dumps wastewater into the river near Barangay Banicain here.

Hernan Habacon, Subicwater spokesperson, said his company has a discharge permit and “our effluent is treated, within permissible limits set by the Department of Environment and Natural Resources.”

“This means [the discharges are] harmless,” he added. Robert Gonzaga,