Seeking forgiveness from the gods 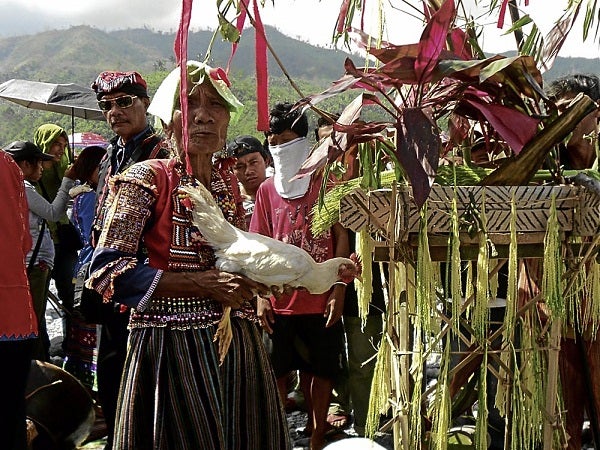 MANDAYA “balyan” Masandak Sikat, one of the balyans who performed the ritual. Photo by GERMELINA LACORTE

NEW BATAAN, Compostela Valley—The haunting melody of the kudlong echoed through the former site of Barangay Andap as people, mostly lumad from five ancestral clusters of the town, marked the 40th day of Typhoon “Pablo,” seeking to reconcile with nature.

In a Mansaka-Mandaya ritual that lasted for over an hour, the balyans (lumad priests and priestesses) danced and chanted around a tree, propped up in the midst of what looked like a wide riverbed covered by huge boulders.

It is all that remains of the site of the village of Andap, which had been completely washed away by rampaging waters from the mountains at the height of Pablo.

“We call on the spirit who sent the floods not to send it again because so many lives have been lost,” said balyan Masandak Sikat in Mandaya, as top officials unveiled the walls bearing the names of people who died and went missing.

“It is clear from the message of the abian (spirit) that we have done wrong (nakasala jud ta),” said Mansaka leader Bernardo Limikid. “Those boulders you see here,” he said, referring to the boulders that carved out a new river course over where the village of Andap once stood, “they came from Dakurang Banwa, a sacred place for the lumad.”

In a tent put up on the ground where a former barangay hall stood, government officials and lumad leaders also performed the tagpud bol’la, (ritual of reconciliation), considered a higher form of ritual among indigenous peoples, where those who had done wrong admit their mistakes and commit never to do them again.

By cutting a bundle of rattan stalks, those who took part in the ritual vowed to cut off their old ways and and start all over again.

Speaking before the crowd, Compostela Valley Gov. Arturo Uy admitted being part of the destruction that was wrought on the village.

“We were part of the destruction, we fell short in protecting the environment. We admit our shortcomings, some of these shortcomings may not be during our time, they may have been done during the time of our ancestors,” he said as he “promised to protect the environment.”

He said the province’s pre-evacuation plan has not anticipated the full impact of the typhoon.

“We were told that the typhoon was not even Signal No. 3, but Signal No. 5, a rare phenomenon, according to the Department of Science and Technology,” he said.

“Our pre-evacuation planning fell short because we have never experienced typhoons before, not even Signal No. 3,” he said. “This is a very big lesson for us.”

Uy urged people not to dwell on the past and to move forward. “Let us move forward, New Bataan will rise again,” he said.

“Let’s stay unified,” he said, “I promise you, no one would be left behind.”

New Bataan Mayor Lorenzo Balbin said except for Sitios Panag and Pagsilaan, the entire Andap village has been hurt most by the typhoon.

He also pointed to a Mines and Geosciences Bureau (MGB) geohazard map identifying the whole area as a danger zone. But Balbin said that workers are de-silting the old riverbed to direct the course of the water back to the old river and to construct more protection dikes.

Balbin urged people to start planting so that after six months they will have something to eat, since relief coming from the World Food Programme (WFP) shall have stopped by then.

“Let’s rebuild it to what it was before,” he said.