For Ati tribe, Dinagyang ‘is about us’ | Inquirer News
Close
menu
search

For Ati tribe, Dinagyang ‘is about us’ 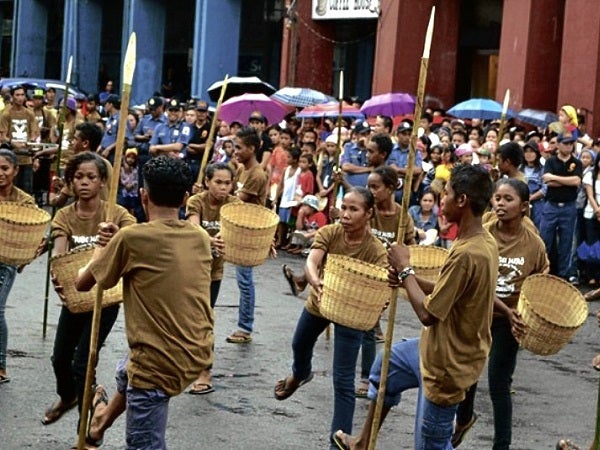 ATI TRIBE members from Barotac Viejo and Anilao towns in Iloilo perform at the Dinagyang opening salvo on Jan. 18. They will be the first Ati tribe members to join the Dinagyang Festival today. ANTOINE GREG FLORES/CONTRIBUTOR

ILOILO CITY—Freshly Tumanon and Roberto Castel would be among the hundreds of performers in the Ati tribe presentation today in Iloilo’s Dinagyang Festival.

But unlike other performers, they would not be wearing elaborate costumes or covering their bodies with soot.

They are members of the indigenous Ati community of Panay Island which has organized a group that is performing during the weeklong festival.

“The Dinagyang is about us, and we are proud of who we are,” said Castel.

The Miro tribe, named after a wild cat, is the only group among 11 Ati tribes that is performing in Dinagyang not for the prize. It will be the first, however, to perform at Freedom  Grandstand.

The tribe’s contingent is composed of 60 dancers and 30 drummers, all Ati tribe members from the Iloilo towns of Anilao and Barotac Viejo.

Joan Palacios, pastor of  Anilao Christian Church who acts as the tribe manager and spokesperson, said the performers were from tribal groups from the villages of Camiros and Mostro, and Sitio Balagon in Barangay Badiang in Anilao, and the Ati reservation in Nagpana in Barangay Lipata in Barotac Viejo.

The four groups have 1,122 members mostly engaged in farming, charcoal-making and hunting. Panay Island has an estimated Ati population of 6,000.

The tribal leaders decided to join the festival this year so they can also showcase their culture, said Palacios.

“For a long time, we have been mere spectators of a festival that was supposed to have originated from us. We are at times disappointed that the festival does not genuinely reflect our culture and practices,” he said.

Their eight-minute performance will depict the life and practices of the Ati community including planting, hunting and weddings.

The group has tapped a choreographer who designed the dance steps based on traditional Ati dances. Costumes of the dancers are made from indigenous materials like pandan leaves and nito fiber.

Tumanon, 13, a student of  Anilao National High School and one of the youngest performers, said she was excited to be part of the performing group. She did not mind the almost nightly practice sessions from 7 p.m. to 10 p.m.

“It’s an opportunity to show who we are,” she said.