MANILA, Philippines — Sacked Chief Superintendent James Melad, the former director of the Calabarzon (Cavite, Laguna, Batangas, Rizal, Quezon) regions, admitted he gave the go-signal to put up the checkpoint in Atimonan, Quezon, on January 6 where 13 people were killed.

Melad in a four-page affidavit submitted to the National 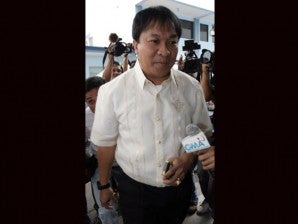 Bureau of Investigation narrated that at around 10 a.m. of Jan.6, he received a text message from Superintendent Hansel Marantan, the region’s intelligence official.

“He said he received reliable information from a reliable source regarding several armed men.’’

“Believing that this is part of the intelligence build-up and validation of targets in Coplan Armado, I replied Okay lang, coordinate with local PNP.’’

However, he said at 4 p.m., he was informed by former Quezon provincial director, Senior Superintendent Valeriano de Leon, that Marantan was wounded in an encounter with several armed men on board two Montero vehicles at the checkpoint along Maharlika Highway in Atimonan, Quezon.

He said that he immediately proceeded to the area, and while on his way to Atimonan, informed Philippine National Police Director General Allan Purisima of the operations.

“While in transit, I reported the matter to the Chief PNP and to the members of his staff,’’ Melad in the sworn statement said.

He said he arrived at the scene at around 8 p.m., but before going there, he also said he passed by Mt. Carmel Hospital in Lucena City, to check the condition of Marantan.

In the hospital he said Marantan told him there was an “encounter.’’

Melad, in his affidavit, also mentioned that the Scene of the Crime Operatives had started processing the crime scene, contrary to the findings of the PNP Fact Finding Result that SOCO started their investigation only after Melad arrived.

He also said that in his 35 years of service as a policeman, he had no derogatory record and never tolerated any wrongdoing among his men.

“Should anyone be found to have committed an offense, they should be accordingly punished, but they should also be given their day in court,’’ Melad said.

He also said he approved the Coplan Armado in line with the PNP Coplan Kamagong.

“I am personally convinced that it could be an accomplishment of the PNP in the region,’’ he said.

He further said that Marantan submitted the Coplan Armado to the Presidential Anti-Organized Crime Commission which gave it  an “initial funding.’’

A PAOCC official earlier admitted the group had given Marantan P100,000 to be used for the intelligence work of Coplan Armado.