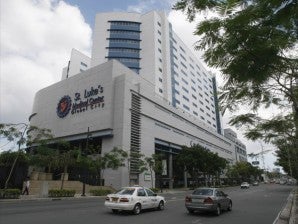 MANILA, Philippines — A Quezon City court ordered the Saint Luke’s Medical Center, on Wednesday, to produce before it an American patient, who has been confined for over three months at the medical facility and has not been discharged because of his unpaid bill of close to P1 million.

Cortez, in his two-page order, also instructed the respondent to file a comment and show cause why the petition for the issuance of the writ of habeas corpus for Hanson should not be granted.

A petition filed in Hanson’s behalf by his attorney-in-fact Arlene Icasiano described Hanson as a United Gospel of the Living God missionary who has been in the country for five years, helping out young orphans using his own resources.

“Unfortunately he [Hanson] got sick. He has no relatives in the Philippines to take care of him but Filipino friends brought him to the St. Luke’s Hospital where he [has] undergone a major operation. He was confined on Oct. 3, 2012. He spent the amount of no less than P704,000 in the hospital for his doctors and hospital bills. Mostly his medicines are purchased by him personally,” the petition stated.

Hanson, the petition stated, was unprepared for a total bill of P1.5 million. “Since he [Hanson] is presently confined, he has difficulty raising the amount of P800,000 and his bill will continue to rise as his present bills are still not included.”

To pay off the bill, Hanson requested that he be temporarily released so he could obtain a health care refund and financial help from the US Veteran’s Office, which could only be processed if he personally applied for them. His lawyer wrote St. Luke’s twice asking for Hanson’s discharge, but the hospital refused to grant the request.

“Petitioner [Hanson] verbally appealed and also formally sent a letter addressed to the proper officer of the hospital, requesting it to allow him to go home to minimize the indebtedness as the hospital still charges the petitioner the amount of P 2,000 a day. But the respondent refused and continually fails and refuses to discharge petitioner,” the petition claimed.

The Dec. 29, 2012, letter Hanson sent to the president of St. Luke’s asked the hospital to allow him to sign a promissory note, so he could get out of the hospital and personally raise the money to pay for the bill.

He had stated in his letter, “Sir, let me reiterate that I am not a bad person; just happened to end up in bad situation for which, if continuously confined here in your hospital, will remain helpless as I am now.”

Apart from ordering St. Luke’s to file its comment or any appropriate pleading in answer to the petition, Cortez ordered Icasiano and Hanson’s counsel Arturo Temanil to appear before the court and substantiate their allegations in the petition.