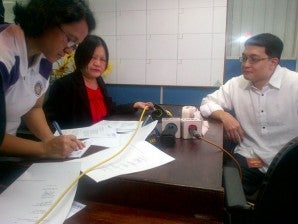 GMA Network Inc. filed Wednesday afternoon a letter before the Comelec asking it to reconsider their previous resolution setting the limit for political advertisement to an aggregate of 120 minutes.

MANILA, Philippines – A television network filed a letter motion for reconsideration before the Commission on Elections (Comelec) Wednesday appealing their resolution that set the allowed airtime for political advertisements to 120 minutes in total.

Comelec earlier issued Resolution 9615 setting the rules and guidelines for all campaign propaganda including broadcast advertisements. National candidates are allowed an aggregate of 120 minutes of airtime for television and 180 minutes for radio.

In its 13-page letter, GMA Network Inc. questioned how Resolution 9615 can be properly complied with saying that “broadcast entities would surely encounter insurmountable difficulties in monitoring the broadcasting minutes spent by numerous candidates for various elective positions.”

“Compliance with the new rules will be cruel and oppressive,” the letter said.

GMA also said that even if candidates were to report to Comelec the number of minutes they have spent for political advertisements, it would fall upon them to verify what the candidates reported.

“Even assuming that candidates shall be required to submit written certifications of their broadcasting minutes, the verification of the authenticity of such certifications is likewise burdensome, oppressive and unreasonable,” GMA said.

“GMA does not have the required expertise to determine whether such certifications from the candidates are indeed genuine and true, and the process of verification is tedious and will entail the allocation of huge resources on the part of GMA,” it added.

The Kapisanan ng mga Brodkaster sa Pilipinas (KBP) had earlier filed a position paper to the Comelec saying that the airtime limitation should be interpreted as “per station” instead of an aggregate of total airtime.

GMA urged that the Comelec reinstate the previous rule on airtime limitations which used the “per station” criterion saying that GMA would not be able to monitor how many minutes candidates have used in other broadcast networks.

“GMA does not have the required capability … to undertake an accurate monitoring and attain a reasonable degree of certainty of a candidate’s remaining quota of broadcasting minutes,” it said.

The Comelec’s rule requiring broadcast entities to obtain prior approval before guesting a candidate as well as equal opportunity for all candidates was also questioned by GMA saying that “the rule would be complicated to implement.”

“[Should] GMA provide, as a consequence of a thirty-second news interview to one candidate, equal time to the rest of the senatorial candidates?” GMA said.

“If this were the case, it would mean that precious manpower and logistical resources including airtime would be conscripted or expropriated by the Comelec, without just compensation, just to comply with this provision,” it added.

GMA also questions why the resolution was passed “without public participation especially from among those affected by the said resolution.”

“It must be stressed that under the Administrative Code of 1987, specifically Section 9 of Chapter II, Book VII, public participation is mandatory,” the letter said. “The Omnibus Election Code of the Philippines … requires due notice to all interested parties and an opportunity for all parties to be heard,” it added.

GMA also asked in the letter that Comelec recall provisions in the resolution that give candidates the Right to Reply and impose a criminal liability for broadcast entities who sell airtime in excess of the allowed limit.