PH politicians mull use of ‘Gangnam Style’ for campaign 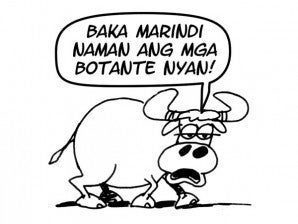 (Editors’ note: This is a corrected version of an article first posted on Jan. 23, 2013. This version also includes a statement from MCA publishing manager Evelyn Seale.)

Across the country, Filipinos may probably hear more of “Gangnam Style,” the phenomenal hit of Korean rapper PSY, with the start of the election campaign for the midterm elections.

The song that has garnered more than 1 billion hits on YouTube is emerging as the favorite campaign song of candidates.

At least two candidates, former President Joseph Estrada, who is running for mayor of Manila, and former senator Ernesto Maceda, who is hoping to return to the Senate, are planning to use it in their sorties.

Representatives Teodoro Casiño of Bayan Muna and Joseph Victor Ejercito of San Juan City, senatorial candidates, claimed that PSY’s decision to put aside his rights to the global hit song and video had made it easier for candidates from senators to governors and mayors to use it in their campaign.

“It’s a no brainer that we will have ‘Gangnam elections,’ especially since the songwriter has waived his copyright to his song and allowed the public to use it as it wishes and this includes the candidates,” said Casiño.

“Gangnam Style is catchy, upbeat and memorable. It is what a campaign song should be,” Casiño said.

But MCA Records head Ricky Ilacad, who owns the rights to PSY’s “Gangnam Style”, said in a text message: “We have not allowed use FOC (free of charge).” He did not elaborate.

Seale said the story provided ‘‘a misleading information coz there’s no statement from the Artist and composers to use the song in any campaign material.’’

‘‘As far as the head office is concerned all usages including campaign material
are subject for approval from the publisher,’’ Seale stressed.

Ejercito said he “decided to look for another song in order to have my own mark” because PSY’s song seemed open to everybody.

The Department of Health used Gangnam Style as its song for its antifirecracker campaign last month.

“A campaign song is a powerful tool in any campaign. It’s the last-song syndrome and it stays with you even after you’ve heard it,” said Ejercito.

He noted that rights to foreign songs would cost an average of $30,000 each.

Ejercito’s camp has come up with a jingle, “Call Him JV,” a parody of the hit song “Call Me Maybe” of Canadian singer Carly Rae Jepsen. Casiño is still reviewing samples made by his supporters.

Estrada’s spokesperson, Margaux Salcedo, said the former President was maintaining his “Jeep Ni Erap” campaign theme, which he used in the 1998 elections, but he had already approved the use of PSY’s song as one of his jingles in his run for Manila mayor.

“He was given a CD mix of “Gangnam Style” as a campaign jingle and he liked it. I’m not sure if he will dance Gangnam on stage although I know that Manong Ernie has already danced to it. We’ll see,” said Salcedo in a phone interview.

The Inquirer asked several senatorial candidates about their campaign song but only two replied as of press time.

Sen. Francis Escudero said he would use “Pagbabago” of Quest, while Sen. Alan Peter Cayetano would settle for Don Mclean’s 1970s “American Pie.”

Sen. Gregorio Honasan II said he had yet to make up his mind on a campaign jingle although his daughter, singer-songwriter Kai, might come up with one for him.

The campaign for senatorial candidates and those taking part in the party-list election begins on Feb. 12 and ends on May 11.

For those running for a seat in the House of Representatives, and candidates for governor, mayor and other local elective posts, the campaign starts on March 29 and ends on May 11.