Prince Harry lashes out at press on return from war zone 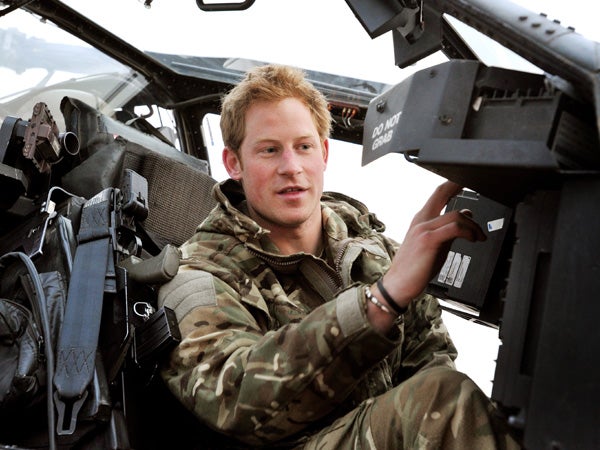 In this photo taken Dec. 12, 2012, made available Monday Jan. 21, 2013 of Britain’s Prince Harry or just plain Captain Wales as he is known in the British Army, makes his early morning pre-flight checks on the flight-line, from Camp Bastion southern Afghanistan. AP Photo/ John Stillwell, Pool

LONDON—Britain’s Prince Harry described his “anger” at the media and accused newspapers of printing “rubbish” and depriving him of a private life in comments released as he completed his tour of duty Monday.

“All it does is upset me and anger me that people can get away with writing the stuff they do,” he told ITV News from his Afghanistan base in an interview which could only be aired after he had left the war zone.

He stressed that the public was “guilty for buying the newspapers” but added he hoped “nobody actually believes what they read, I certainly don’t”.

Harry traced his mistrust of the media back to his mother’s 1997 death in a Paris car crash after she was pursued by photographers.

“I think it’s fairly obvious how far back it goes—to when I was very small,” he told the news network.

The prince, third-in-line to the British throne, slammed newspapers for “forcing” brother Prince William and sister-in-law Catherine into revealing they were expecting a baby.

He also rubbished reports that he had written to Catherine from his Camp Bastion base.

“How any of the papers think that they know the relationship between myself and my sister-in-law is quite remarkable,” he complained. “They’re wrong, as always.”

According to Harry, one of the “great” things about being in the war-torn nation was that “it’s away from all the media back home, which is one of the real negative points about the UK.”

He highlighted the publication of nude photographs of him in a Las Vegas hotel room taken shortly before his five-month deployment as an example of press intrusion.

“I probably let myself down, I let my family down, I let other people down,” the prince said.

“But at the end of the day I was in a private area and there should be a certain amount of privacy that one should expect.

“I don’t believe there is any such thing as private life anymore.”

Harry spent a 20-week posting flying scores of missions over the restive southern Helmand Province in an Apache attack chopper.

The 28-year-old said Islamist insurgents were put “out of the game” and described life in the sprawling Camp Bastion base, where he slept in a tent and a shipping container.

Asked by Britain’s Press Association if he had killed from the cockpit, Harry said: “Yeah, so lots of people have.”