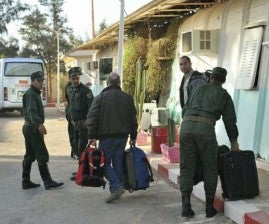 Two British hostages, Peter, right, and Alan, carrying his luggage, no family name available, gather their belongings after being released, in In Amenas, near the gas plant where they were kidnapped by Islamic militants, Saturday, Jan. 19, 2013. After the hostage crisis was finally brought to a bloody end on Saturday by the Algerian military, a picture has begun to emerge of the horror and savagery of the attack. AP PHOTO/ANIS BELGHOUL

LONDON—As they prowled the In Amenas gas complex for hostages, the gunmen who attacked the Algerian site discovered a brutal but effective tactic to persuade foreign workers to come out of hiding.

They threatened a British man into calling out to his colleagues in English, “Come out, they’re not going to kill you,” according to an Algerian worker named Chabene who heard the exchange before he escaped.

He said they ordered the man to yell, “‘They’re not going to kill you. They’re looking for the Americans.’ A few minutes later they blew him away.”

After the hostage crisis was finally brought to a bloody end on Saturday by the Algerian military, with the deaths of at least 25 foreigners and Algerians, a picture has begun to emerge of the horror and savagery of the attack.

In the past few days, survivors have told how they were strapped to explosives, and the apparent leader of the militants, Abdul Rahman al-Nigeri, confirmed that he was ready at any time to blow up the hostages.

“By Allah, we will blow them up if the Algerian army gets close to us,” he warned in a recording broadcast on Saturday.

One Briton and one Algerian were killed in the first attack by gunmen on a bus on Wednesday morning, before the militants stormed the complex, but witnesses told AFP that nine Japanese workers also died in the first frantic hours.

The gunmen, carrying nail-wrenches, shot dead three Japanese as they tried to escape before taking more hostages to the Japanese area of the site’s residential compound, according to Riad, who worked for Japanese engineering firm JGC.

“A terrorist shouted, ‘Open the door!’ with a strong north American accent, and opened fire. Two other Japanese died then and we found four other Japanese bodies” inside the compound, Riad said, choking with emotion.

Iba El Haza, an Algerian driver at the BP gas plant, told AFP that the gunmen were armed with AK-47s, machine guns and rocket-propelled grenades and were interested only in keeping Western hostages.

“The terrorists said: ‘You have nothing to do with this, you are Algerians and Muslims. We won’t keep you, we only want the foreigners,’” said the man, who escaped during a rescue attempt by Algerian special forces on Thursday.

Another Algerian survivor told Britain’s Mail on Sunday newspaper how the gunmen seemed to know their way around the site and the names of the people responsible for certain areas, as well as where keys were kept.

“The terrorists went to the alarm station, switched off the alarms, and forced the deputy manager to show them where the expats were,” the unnamed man said.

“They rounded up the expats, making them all wear explosives around their necks while standing in a circle.”

The Algerian workers were held separately and “were treated with kindness,” he said, and eventually they were allowed to leave.

“I was allowed to go, but before I did, I saw many Brits killed,” he said. “One Westerner trying to give first aid was blown up by the terrorists.”

The gunmen tried to cut off the communications network to stop the hostages contacting the outside world, but some of them still managed to get through to relatives back home.

Stephen McFaul, a 36-year-old from Northern Ireland, sent a text message to his family saying: “Are you listening? Al-Qaeda have taken me hostage and they have a list of demands. They want the Algerian army to pull away from the base.”

The kidnappers placed explosives around his neck, but he later escaped after a vehicle he was in crashed while coming under attack from the Algerian military, his brother Brian said.

Workers such as Alan Wright, 37, from Britain, managed to stay hidden for 30 hours before being rescued by the Algerian military.

Other hostages chose to take their chances with the desert.

A 57-year-old Norwegian man was among eight people who fled the gas complex on Thursday night, the Verdens Gang newspaper reported.

They spent 15 hours walking through the desert before arriving at the nearest town of In Amenas, exhausted and severely dehydrated.

In another account reported in the US media, an Algerian driver named only as Brahim told how he joined about 50 people including three foreigners in escaping through the metal fence surrounding the complex.

“As bullets rang out nonstop, we cut holes in the metal fence with large clippers, and once through, we all started running,” he said.

“We were quickly taken in by the special forces stationed just a dozen meters from the base. I didn’t look back.”