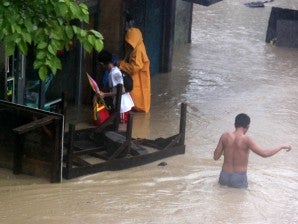 DAVAO CITY — -Several riverside villages here have been submerged in floodwater since Saturday after the Davao River overflowed following non-stop rainfall due to low pressure area over Mindanao.

In some areas, including the El Rio Subdivision, the floodwater was already waist-deep.

Police, government soldiers and the city’s Central 911 rescue teams are conducting rescue and evacuation operations in the affected areas.