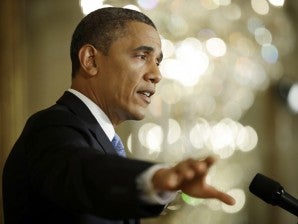 President Barack Obama gestures as he answers questions from members of the media during a news conference in the East Room of the White House in Washington, Monday, Jan. 14, 2013. AP FILE PHOTO

WASHINGTON – US President Barack Obama said Saturday that blame for deaths stemming from a hostage crisis in Algeria lay with the “terrorists” who had earlier taken foreigners captive at a remote gas plant.

The remarks were the president’s first direct comments about the protracted hostage crisis. His statement was released several hours after Algerian troops stormed the gas plant to end a situation that had began four days earlier.

“Today, the thoughts and prayers of the American people are with the families of all those who were killed and injured in the terrorist attack in Algeria,” Obama said.

“The blame for this tragedy rests with the terrorists who carried it out, and the United States condemns their actions in the strongest possible terms.”

Obama said the attack by Al-Qaeda-linked gunmen at the In Amenas facility deep in the Sahara was a reminder of the threat posed by “Al-Qaeda and other violent extremist groups in North Africa.”

The United States had been in constant contact with Algerian officials over the crisis, the president said.

“In the coming days, we will remain in close touch with the government of Algeria to gain a fuller understanding of what took place so that we can work together to prevent tragedies like this,” Obama added.

Twenty-one hostages died during the siege and 32 kidnappers were also killed, while special forces were able to free “685 Algerian workers and 107 foreigners,” according to Algeria’s Interior Ministry.

Among the dead were an unknown number of foreigners — including from Britain, France, Romania and the United States — and many were still unaccounted for, including Japanese.

In Saturday’s assault, “the Algerian army took out 11 terrorists, and the terrorist group killed seven foreign hostages,” state television said, without giving a breakdown of their nationalities.

A security official who spoke to AFP as army helicopters overflew the plant gave the same death tolls, adding it was believed the foreigners were executed “in retaliation”.