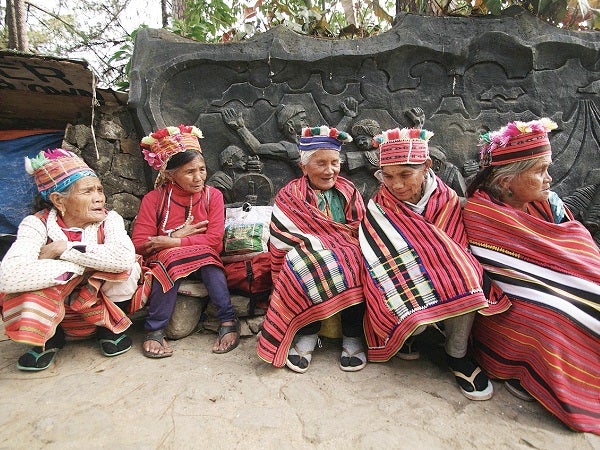 HEARTWARMING Elders from Sadanga, Mountain Province, bear the coldest weather yet in the summer capital as they gather around Baguio Botanical Garden tightly wrapped in their colorful, woven “tapis.” The temperature dropped to 9.5 degrees Celsius in Baguio City on Friday. RICHARD BALONGLONG/INQUIRER NORTHERN LUZON

There has been a rise this week in the sale of jackets and paraphernalia, which are on display along sidewalks in the evenings as this city experienced its frostiest morning of 2013, based on a report of the weather bureau.

It is not the cooling weather that is worrying Baguio residents but the influx of visitors which may affect the city’s rationed water supply.

But the 9.5-degree weather was still a far cry from the coldest day recorded in the country—at 6.3 degrees Celsius, also in Baguio— which occurred, by coincidence, on another Jan. 18, in 1961, the Philippine Atmospheric, Geophysical and Astronomical Services Administration (Pagasa) said.

Friday’s lowest temperature was the coldest recorded so far this year, a drop from the 11.2 degrees Celsius on Thursday.

The nippy weather is also good for the tourism of Baguio, whose peak season is from November and December to the coldest months of January and February for the monthlong annual Baguio Flower Festival and the summer for which the mountain city earned its title.

Pagasa forecaster Alvin Pura said the northeast monsoon, or the freezing winds blowing from Siberia known locally as hanging amihan, was what was triggering the cold spell in the country, especially in Luzon.

It will be the dominant weather system until February, Pura said.

Metro Manila experienced its coldest day on Thursday with temperature at the Pagasa’s Science Garden reaching 19.5 degrees Celsius at 6 a.m.

It was slightly colder at  Ninoy Aquino International Airport (Naia), where the thermometer registered 18.8 degrees, he said.

“But we don’t consider temperature readings from Naia and other places besides the Science Garden in Quezon City as representative of the weather in the whole Metro Manila,” Pura said.

The forecaster, however, said Metro Manila and other southern provinces in Luzon were expected to be slightly warmer in the days ahead with the receding of the northeast monsoon.

“In the next few days, the effects of the northeast monsoon will be limited to northern parts of Luzon,” Pura said, suggesting that the people of Baguio City might have to bundle up for other mornings as cold as Friday.

At Mt. Sto. Tomas, the highest point in Baguio at 2,260 meters above sea level, the temperature plunged to 7 degrees, according to Danny Galati of the Pagasa station in Sto. Tomas.

Salvador Olinares, senior weather specialist of the Pagasa station here, said the cold weather had been sustained because there had been no rain.

“Our major concern in Baguio is the lack of water supply. The high pressure will mean less rainfall. And if we lack rain, our water reservoir will not be enough to supply the needs of residents and tourists,” he said.

Salvador Royeca, assistant manager of the Baguio Water District (BWD), said people should not worry. He said the 16 deep wells and other water sources continued to supply water to households, hotels and lodging homes. The utility produces 55,000 cubic meters of water each day.

Royeca said extreme water rationing took place during previous summers, but he added that the BWD had set up schemes to ensure there would be no water shortage during the dry months.

Here are other cold facts about the chilly weather, based on reports of Pagasa:

Aside from Baguio, other areas in Benguet are also famed to be the coldest in the country. So cold were they that in December 2008, these areas experienced frost, prompting tourism officers of the province to call them “Little Alaska.”

Baguio recorded its coldest temperature on Jan. 18, 1961, when it hit 6.3 degrees Celsius. In January 2009, Baguio hit 7.5 Celsius, the coldest recorded temperature in the area since January 1986.

Temperature in the area reached 9.8 degrees in 2008, according to Pagasa, though thermometers at the municipal agriculture in Benguet said temperature reached as low as 5 degrees in the area.

In Metro Manila, the lowest temperature was recorded at 14.5 degrees in January 1914, according to data from Pagasa. Temperature in the Metro also reached 15.1 degrees between 1987 and 1988, Pagasa said. With reports from Marielle Medina and Kate Pedroso, Inquirer Research