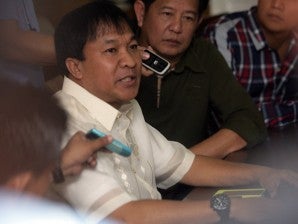 Calabarzon (Cavite, Laguna, Batangas, Rizal, Quezon) regional director of the Philippine National Police, Chief Supt. James Melad,speaks in a news conference at the National Bureau of Investigation Headquarters in Manila on Wednesday for the investigation of the Atimonan encounter, killing 13 people in an alleged shootout between government security forces and alleged criminals.INQUIRER / NIÑO JESUS ORBETA

CAMP VICENTE LIM, Philippines – Chief Superintendent James Melad, the former director of the Calabarzon (Cavite, Laguna, Batangas, Rizal, Quezon) police, who rushed to the site of a supposed gun battle with alleged criminals in Atimonan, Quezon on January 6, on Friday said he could not remember what Supt. Hansel Marantan was wearing when he saw the wounded intelligence officer in the hospital.

Marantan, was the relieved deputy chief of intelligence of the Calabarzon police and leader of the police team at the checkpoint in Atimonan where the supposed shootout happened.

“He was wearing [denim] pants but they looked like the doctors had cut them because of the shots – gunshot wounds – in his knees,” Melad said in a phone interview.

What Marantan was wearing became vital after witnesses on Thursday told Justice Secretary Leila de Lima during the reenactment by the National Bureau of Investigation, that a man who was wearing an olive drab jacket over an orange striped shirt was the one who gave the order to fire.

Asked what else Marantan wore, Melad replied, “I don’t recall.”

Melad and Senior Supt. Valeriano de Leon, former Quezon provincial police chief, rushed to the checkpoint site in Atimonan, but first went to a local hospital in Lucena City in Quezon after learning that Marantan had been shot.

“I thought he was already dead,” Melad said in Filipino.

“[Marantan] was trying to tell me what happened [but] he was having [difficulty] speaking because he was in pain,” Melad said.

In an interview with the Philippine Daily Inquirer on Tuesday, Marantan recalled being hit before he fell to the ground. Some of the policemen carried him away and the firing started.

“I believe that triggered the gunfight when they saw me, their ground commander, gunned down. There was even no time to order fire,” he said.

Marantan said he passed out after being hit. He regained consciousness on the way to hospital, he said.

“I called up RD (Regional Director Melad). I said, ‘Sir, I was outsmarted. I was hit,’” Marantan said in English and Filipino.

Marantan said he was in civvies because he was carrying out an intelligence operation.

“A good operation does not require all operatives to be in uniform because you need to blend with the community,” he said.

The Inquirer on Friday tried to contact Marantan for comment on the NBI findings, particularly the eyewitnesses’ accounts, but the calls to him went unanswered.