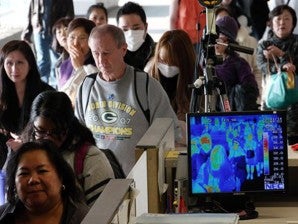 A thermal camera monitor shows the temperature of passengers from Chicago as part of precautionary measures against possible infection of flu upon their arrival at Incheon International Airport, west of Seoul, South Korea, Monday, Jan. 14, 2013. The Department of Health on Tuesday warned the public to guard against the flu that has reached epidemic proportions in the United States. AP PHOTO/SEO MYUNG-GON, YONHAP

MANILA, Philippines—The Department of Health (DOH) on Tuesday warned the public to guard against the flu that has reached epidemic proportions in the United States.

Health Secretary Enrique T. Ona urged the public to watch out for flu symptoms such as fever, a sore throat and cough.

“Influenza can be a very serious ailment. It can lead to hospitalization and death,” Ona said in a statement.

He said that young children, pregnant women, senior citizens and those with certain health conditions such as heart, kidney or lung disease, could easily catch the flu and suffer greater complications.

“To prevent the flu from spreading, one who is sick should stay at home as it takes only a few days before symptoms subside,” Ona said.

The health secretary also urged the public to observe everyday hygiene to protect against the flu, “like proper hand-washing, cough etiquette and social distancing.”

He said the DOH was monitoring the flu situation in the United States, which had reached “epidemic proportions” in several states.

Though the influenza season in the Philippines is typically between July and December, Ona stressed the need for people to be vigilant.

“The Christmas season brought relatives from the United States. I have instructed the Bureau of Quarantine to intensify fever screening at the points of entry,” he said.

“Though there are neither travel nor trade restrictions as a result of the US flu situation, we must be on our guard to detect influenza cases not only at our seaports and airports but also in our health facilities,” Ona said.

He said influenza is a viral illness that is easily spread from person to person through droplets in the air when one sneezes, coughs or talks.

A person who is infected becomes sick two days after.

Ona said an infected person could pass the virus to others a day before his own symptoms appear and for up to five days after.

He said senior citizens could avail themselves of free flu shots at public health centers. High-risk individuals, such as those with weak immune systems, should visit their doctors immediately, he added.