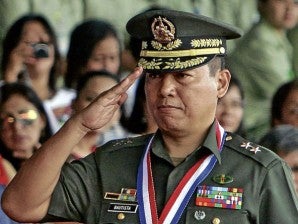 The son of a general who was killed by Moro rebels 35 years ago is the next chief of staff of the Armed Forces of the Philippines.

Lt. Gen. Emmanuel T. Bautista was a freshman cadet at the Philippine Military Academy (PMA) when his father was killed.

On Tuesday, President Aquino named him AFP chief of staff.

Bautista, the bemedaled commanding general of the Philippine Army, will take over as the 44th AFP chief of staff at the turnover of command on Thursday, three days ahead of the mandatory retirement of Gen. Jessie D. Dellosa, according to deputy presidential spokesperson Abigail Valte.

Bautista is the son of the late Brig. Gen. Teodulfo Bautista, who was killed along with 33 other military officers and men, by rebels of the Moro National Liberation Front (MNLF), on Oct. 10, 1977, in Patikul, Sulu province.

The elder Bautista was lured by Usman Sali, an MNLF commander, into a meeting in Patikul with a promise to talk about a ceasefire. To show his goodwill, Teodulfo Bautista came to the meeting unarmed. Only one soldier survived the massacre.

Bautista had said that he continues to visit the site where his father and his men were killed, more than 30 years after their deaths.

Bautista is a graduate of the PMA. He belongs to the “Dimalupig” Class of 1981, just like Alan Purisima, the newly appointed director general of the Philippine National Police.

He was also a graduate of a war fighting course at the Joint Forces Staff College in Virginia, USA, and a tactics course in New Zealand.

“We thank outgoing AFP Chief of Staff Dellosa for having served the country and our uniformed personnel with exemplary dedication and commitment,” Malacañang said in a statement.

“We look forward to the stint of the incoming AFP chief of staff in continuing the reforms set in motion by the President and implemented by his predecessors in advancing the interests of our soldiers and the enhancement of the defense capabilities of our country,” it said.

Prior to his appointment as Army chief in November 2011, Bautista, who will turn 55 in July, had been assigned to various posts around the country, but never in Sulu.

After graduating from the PMA in 1981 he readily asked to be assigned in Sulu with the 1st Infantry Division, the unit his father commanded before his death. His request was denied and, as a compromise, he was assigned to Lanao del Norte,  another province in Mindanao.

As a lieutenant, Bautista served in Mindanao as a platoon leader of the 26th Infantry Battalion from 1981 to 1983. He also saw action in the Visayas as the leader of the 7th Scout Ranger Company from 1987 to 1989.

He was also the commander of the 702nd Infantry Brigade of the 7th Infantry Division, which cleared areas in Central Luzon of communist influence from 2008 to 2009.

The military on Tuesday welcomed the appointment  of Bautista.

“We are confident that Lieutenant General Bautista would be able to continue the current programs, initiatives and reforms being undertaken by the AFP for the fulfillment of the goals of Internal Peace and Security Plan Bayanihan and the accomplishment of its constitutional mandate,” said military spokesperson Col. Arnulfo Burgos in a statement.

It was Bautista himself who crafted IPSP Bayanihan, the current anti-insurgency campaign of the government anchored on a multi-sectoral effort of “winning the peace” instead of carrying out a bloody campaign to end the decades-long insurgency problem of the country.

Bautista’s focus on “winning the peace” takes root in the violent death of his father.

Bautista is also focused on reforming the image of the Army, and now as military chief, expectedly the entire Armed Forces.

He was very supportive of the Army Transformation Road Map, which he said aims to change the “tarnished” image of the Army because of allegations of human rights violations, among others.

Burgos said Bautista’s appointment as AFP chief of staff was “timely as the implementation of the IPSP Bayanihan shifts to high gear on its third year of implementation.”

“Being the chief architect of IPSP Bayanihan and now at the helm of the AFP, we are highly optimistic that he will be able to lead and enable the organization to make vital progress and significant developments that will help the organization and its partner agencies and stakeholders to achieve the shared goals of a just and lasting peace for our country,” Burgos said.

Moreover, the AFP is hopeful that under Bautista’s leadership, the military’s modernization and capability upgrade program will “further take a momentous step forward in our intent to achieve a minimum credible defense posture,” Burgos said.  With Frances Mangosing, INQUIRER.net