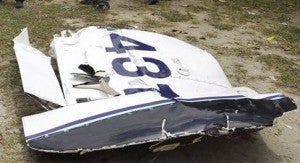 MANILA, Philippines—The Civil Aviation Authority of the Philippines (CAAP) has suspended one of its flight examiners who allegedly faked a report that said he had conducted a proficiency check ride on the pilot of the doomed plane carrying Interior Secretary Jesse Robredo.

CAAP Director General William Hotchkiss III issued the 90-day preventive suspension order against Nomer Lazaro, who claimed to have tested the capability of Capt. Jessup Bahinting prior to the renewal of his pilot license in May 2012.

Bahinting was at the controls of the Piper Seneca plane on Aug. 18, 2012, that crashed and sank off the waters of Masbate. Bahinting, Roberdo and student pilot Kshitiz Chand died in the crash.

During the preventive suspension, the investigation of Lazaro’s actions that might indicate criminal and administrative liabilities would proceed, according to CAAP Deputy Director General John Andrews.

“An actual proficiency check ride is mandatory prior to the renewal of a pilot’s license. This is to test a pilot’s capabilities. Sadly our team has come across evidence that Captain Bahinting was able to skip the process with the unlawful cooperation of CAAP’s own personnel,” Andrews said in a statement.

The suspension order cited a certificate issued by Mactan Flight Service Station stating that no flight plan had been filed for the purpose of conducting a check ride or test flight for Bahinting. The Mactan-Cebu International Airport Authority has also certified that no landing and take-off fees were paid by Aviatour’s Flyin’ Inc., Bahinting’s company, for such a proficiency check ride.