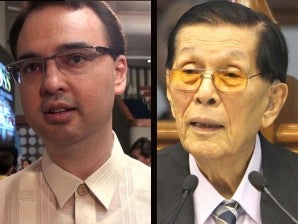 “What is affected here is the integrity and independence of the Senate. Because once this becomes a system, it will become the norm. This is Enrile Martial Law tactics,” Cayetano said in a statement Friday regarding the cash gifts given to senators in December the previous year.

Enrile was said to have used savings from the Senate’s budget and converted it into maintenance and other operating expenses (MOOE) which he gave to the senators except for four of his known critics in the Senate.

The four are Cayetano, his older sister Pia, Miriam Defensor-Santiago, and Antonio Trillanes IV. They had reportedly received P250,000 each.

“I think this was meant to prevent a leadership change,” Cayetano said, referring to the cash gifts for the 18 senators who were mostly in the majority bloc.

“I don’t know why [Enrile] would do that other than to send a message that if you cross him even on issues, this is what’s going to happen to you,” he said.

Rumors that Enrile would be removed from the Senate presidency spread several times last year. He had responded to the rumors several times by saying that he was willing to give his seat to whoever wants it.

“This is really a bad precedent. This Enrile precedent is the first time wherein regular funds for MOOE, the Senate President chose who he liked to give to, and those who he disliked were not given any,” Cayetano said. “For me it’s an issue of the independence of the Senate.”

“The four of us have been standing up to him when it comes to certain issues. But as we said, there’s nothing personal with that. They are just issues,” he said.

Cayetano said that he would be preparing for more of the same tactics once election time comes.