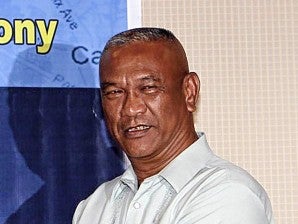 It was  not the first time Ramos, a retired Army major general,  notified the DND he was quitting his post.

“This is his third time to submit, the first two times the Secretary asked him to stay on because of the critical nature of his job and effective handling. Because of him there is heightened disaster awareness of the people,” Galvez said.

He said that the NDRRMC executive director has to attend to his ailing wife, who is suffering from complications of diabetes.

He described Ramos  as “effective” in increasing disaster awareness and consciousness.

Before his retirement, del Rosario headed the Army’s 2nd Infantry Division in Rizal and Task Force-Kalihim, which led the search and retrieval operations after the plane carrying former Interior Secretary Jesse Robredo and three others crashed off Masbate in August last year.

Ramos handled the NDRRMC when the country was devastated by strong typhoons like Sendong in 2011 and Pablo in 2012.

One of the easy-going and hardworking government officials to the press and public, Gazmin once described Ramos as a “media favorite.”