Court asks who would suffer more injury – Gwen or gov’t? 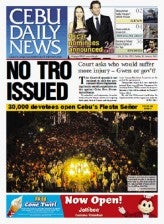 The Court of Appeals is not inclined to stop the government from implementing the six-month suspension order against Cebu Gov. Gwendolyn Garcia.

In yesterday’s oral arguments, Associate Justice Vicente Veloso said that in weighing both sides, that of Garcia and the government, irreparable injury is greater on the part of the government.

He said that if the court would stop the implementation of the suspension order for 60 days, after its lapse, Garcia would again be suspended and in the same situation she’s in today.

A ruling is expected to be out soon after an almost three-hour hearing was held in Manila.

The suspension by the Office of the President was served on Dec. 19, 2012 but Garcia remains holed up in her office, defying what she calls an “illegal” order.

At one point, Justice Veloso yesterday noted Garcia’s media interviews deploring her suspension, and asked the governor not to “make noise” anymore.”

“Why can she (Garcia) allow this Court to resolve this case expeditiously and with no fanfare, he was quoted as saying.

In the Capitol yesterday, the suspended governor told reporters she was ready to take the legal battle farther if needed. The option of elevating the case to the Supreme Court, which would mean a longer wait.

“We will exhaust all legal remedies available to us under the law. We will continue to seek redress even without a TRO,” said Garcia, who repeated that “I’m not going anywhere”.

The Capitol impasse which entered its 23rd day has seen two demonstrations of placard-bearing Garcia supporters in the front steps of the government building, an escalating word war with police officials, and revelations of cash flow problems and unpaid bills in the provincial government.

Garcia was earlier found guilty of grave abuse of authority in an investigation by the late Local Government Secretary Jesse Robredo. The case stemmed from a 2010 complaint of usurpation filed by Vice Gov. Gregorio Sanchez Jr. whose budget was slashed and appointing powers over employees and consultants in the legislative branch were taken over by the governor.

Garcia was represented in yesterday’s hearing by Tranquil Salvador III.

Justice Veloso said a TRO would be contrary to the exercise of the disciplinary power of the President. He asked what injury Garcia would suffer when she could still recover back wages later on if she wins the case.

Garcia’s legal counsel, Salvador, said the case was not about the money but the desire to serve the public that would be lost and her besmirched reputation brought about by a suspension that is not proper.

Justice Veloso, who chairs the three-member CA 12th division, criticized Garcia’s petition saying she should have filed for a petition for certiorari under Rule 65 of the Rules of court, where the appeals court could issue a TRO and at the same time ensure rights of both parties are protected.

But in this case, Garcia cited Rule 43 of the Rules of Court asking for a TRO on the ground of irreparable injury.

“Irreparable injury is on the side of the government…While in Rule 65 we can issue a TRO. In Rule 43, we cannot… The Court is in a bind. Shall we consider your petition as not properly filed or give it due course?” Veloso said.

“Again the court does not know what to do. We are three [justices] here, convince us,” Veloso told Garcia’s counsel.

Salvador argued that the decision of the Office of the President should be nullified for violating Garcia’s constitutional right to speedy trial.

He said a 30-day period in which administrative cases have to be resolved under the Local Government Code and Administrative Order No. 43 was not followed.

Salvador also said the suspension order should have been personally served to Garcia, an original or certified true copy of the decision and order of suspension.

Instead, what was served to Garcia’s staff was a photocopy of the suspension order while a copy of the decision ordering her six-month suspension was given to Cebu Government’s Legal Office.

Salvador also said the order was issued less than a month before January 13 when the period that an elective official can no longer be suspended starts and less than 90 days before the campaign period begins.

The Office of the Solicitor General, representing the government, said the 30-period for the government to resolve an administrative case is not mandatory, considering, among others the duties and responsibilities of the President.

They also pointed that a TRO is no longer proper since the suspension order has been implemented and Acting Gov. Agnes Magpale has been sworn into office.

After the hearing, the Court of Appeals submitted the case for resolution.

Garcia, a member of the United Nationalist Alliance (UNA), is serving her third and last term as Cebu governor.

The six-month suspension which ends in June covers the last six months of her term as well.

The OSG earlier argued that the decision of the Office of the President in an administrative case is “final and executory” and that an appeal does not stop it from being implemented.

Garcia’s daughter Christina Frasco, a Capitol consultant, was present as part of the legal team in the hearing.

In a text message later, she said she was happy with the proceedings.

“We were very happy with how the hearing turned out today. We were able to exhaustively present and defend our case.”

Frasco said the OSG made “crucial admissions” that only a photocopy of the suspension order was posted in the Governor’s Office and that a 30-day period to decide the administrative case against Garcia was not followed.

Zaballero said she too was satisfied with the thorough hearing which ended past 1 p.m.

“Each side was given ample time to explain their side. Klaro kaayo nga they were governed by set of rules. They were following the rules,” she said. /Inquirer.net with Correspondent Carmel Loise Matus and Christine Emily Pantaleon