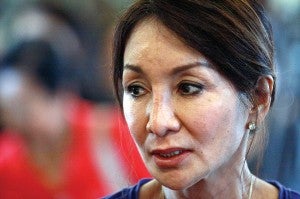 MANILA, Philippines—The Court of Appeals is not inclined to stopping the government from implementing the suspension order against Cebu Governor Gwendolyn Garcia.

During Thursday’s oral argument, appeals court Associate Justice Vicente Veloso said, weighing both sides, that of Garcia and the government, irreparable injury is greater on the part of the government.

Veloso said, if the Court of Appeals will stop the implementation of the suspension order for 60 days, after its lapse, she will again be suspended and be in the same position she’s currently in today.

He added that it is also be against the exercise of the disciplinary power of the President.

Veloso asked how Garcia will be injured when if later on she will win her case, she can still recover back wages.

But Garcia’s lawyer Tranquil Salvador said it is not about the money but the desire to serve the public that will be lost and her besmirched reputation brought about by a suspension that is not proper.

Veloso said Garcia should have invoked a different provision of the Rules of Court (Rule 65) which would give the appeals court to issue a TRO but the rights of both parties can be protected.

But in this case, Garcia cited Rule 43 of the Rules of Court asking for a TRO on the ground of irreparable injury.

“Irreparable injury is on the side of the government…While in Rule 65 we can issue a TRO, in Rule 43, we cannot…The Court is at a bind, shall we consider your petition as not properly filed or give it due course,” Veloso said.

“Again the court does not know what to do. We are three [justices] here, convince us,” Veloso told Garcia’s counsel.

Salvador argued that the decision of the Office of the President should be nullified for violating the right to speedy trial of Garcia.

Under the Local Government Code and the Administrative Order No. 43, an administrative case has to be resolved within 30 days.

He also pointed that the suspension order should have been personally served to Garcia, an original or certified true copy of the decision and order of suspension.

Salvador said what was served to Garcia’s staff was a photocopy of the suspension order while a copy of the decision ordering her six months suspension was given to Cebu Government’s Legal Office.

The suspension order was also suspect saying that it was issued less than a month before January 13 when the period that an elective official can no longer be suspended starts and less than 90 days before the campaign period begins.

Government lawyer, meanwhile said the 30 period for the government to resolve an administrative case is not mandatory, considering, among others the duties and responsibilities of the President.

They also pointed that a temporary restraining order is no longer in order since the suspension order has been implemented.

After the hearing, the Court of Appeals already submitted the case for resolution.

Garcia, a member of the United Nationalist Alliance (UNA), asked the CA to stop the 6-month suspension slapped against her by President Benigno Aquino III  arising from an administrative case in 2010. The late Cebu Vice-Gov. Greg Sanchez, Jr. charged Garcia for diverting the province’s budget for alleged anomalous contracts.

The Office of the President (OP) found Garcia guilty of grave abuse of authority. Garcia, for her part, claimed that the suspension order was politically motivated.