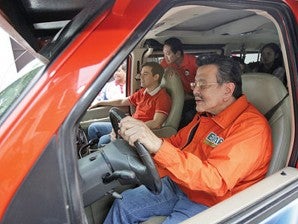 MANILA, Philippines – Former president Joseph Estrada is not yet off the hook and may find himself ineligible to seek public office, a lawyer from Manila said Thursday.

“[Estrada] is not yet free from the disqualification process in his bid for Manila mayor because a case is still pending at the Commission on Elections,” former Second Assistant City Prosecutor Danilo Formoso said following reports that the Sandiganbayan has cleared the way for Estrada’s political comeback.

In an e-mail to the Philippine Daily Inquirer, Formoso said he had filed a seven-page formal letter of inquiry to the Comelec asking the poll body to exercise its constitutionally mandated task to motu propio cancel Estrada’s certificate of candidacy.

As with other cases filed, the issue raised was the conditionality of the pardon granted to him which Formoso said did not restore Estrada’s right to seek public office.

A civil case filed by two Manila residents on the same issue is also pending at the Manila Regional Trial Court.