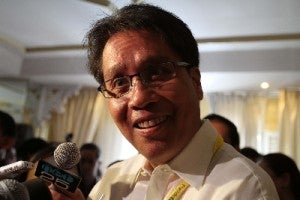 MANILA, Philippines — The involvement of Superintendent Hansel Marantan in at least four sensational gun battles purportedly with criminal gangs, in which a total of 40 people were killed, over the past seven years, has puzzled Interior Secretary Manuel “Mar” Roxas II.

The latest fire fight Marantan figured in was on Sunday in Atimonan, Quezon. There, 13 people allegedly belonging to a criminal gang were killed — among them Supt. Alfredo Consemino and his two police aides and two soldiers.

Speaking with reporters on Wednesday, Roxas said he had asked the Philippine National Police (PNP) to review the career records of Marantan, who had been promoted despite the controversies hounding him.

“We want to look at his records and files. We want to know his background and history. Is he just trigger-happy? Or is he just that brave?” Roxas said. “We want to know the reason why he was involved in many cases of bloody shoot-outs.”

But he refused to comment about reports linking Marantan to crime syndicates in Calabarzon (Cavite, Laguna, Batangas, Rizal and Quezon) region, particularly on his alleged involvement in the operations of the illegal numbers racket “jueteng,” and what triggered the gun battle.

“Whether it’s jueteng, illegal drugs, illegal logging, that we cannot tell yet. We must determine the facts, provable and ascertainable facts,” he said.

Marantan, a graduate of the Philippine National Police Academy Class 1998, was charged for the supposed armed encounter between operatives of the PNP Highway Patrol Group and the suspected members of the Valle Verde car theft syndicate in Pasig City in November 2005.

Marantan, then a police senior inspector, was the team leader of the HPG operatives who killed alleged car thieves Anton Cu-Unjieng, Francis Xavier Manzano and Brian Anthony Dulay, who turned out to be members of wealthy families.

In December 2008, he again took part in a daring police operation against members of the dreaded Alvin Flores robbery group in Parañaque City.

Sixteen people, among them seaman Alfonso de Vera and his 7-year-old daughter Lia Allyana, were killed in the exchange of gunfire between the HPG operatives and the alleged robbers.

In October 2010, Marantan and his subordinates in the 415th Provincial Police Mobile Group traded shots with a group of supposed kidnappers at a checkpoint in Candelaria, Quezon.

Eight suspected kidnappers were killed in the gun battle, which happened just a few steps away from the headquarters of Marantan’s group.

Despite questions raised over these encounters, PNP officials who were interviewed by the Philippine Daily Inquirer described Marantan as a “policeman with balls” and “a determined police officer.”

The police officials declined to be named in deference to the investigation being conducted by the PNP and the National Bureau of Investigation.

One of the sources, who had known Marantan since their cadet days in the PNPA, said Marantan’s training in the Army’s Special Forces and Navy intelligence had honed him to become a “brave police officer who is not afraid to get after criminals.”

In fact, he said Marantan’s role in successful police and military operations in the past earned him accolades and awards.

“They can say many bad things about Hansel. But no one can refute his dedication to his work as a police officer. He’s a policeman with balls,” the PNP official said.

But another police official said Marantan had earned the ire of some senior PNP officers for his supposed links with illegal gambling personalities and other criminal syndicates in Calabarzon region.

The second source, who was also close to the police official, claimed Marantan’s sister, Cenen “Tita” Dinglasan, has been operating small town lottery bookies in Laguna.

“Tita was a rival of Vic Siman in the operations of jueteng and bookies in Calamba and some parts of Batangas,” the source said, referring to Victor Siman, one of the 13 fatalities in the Quezon clash.