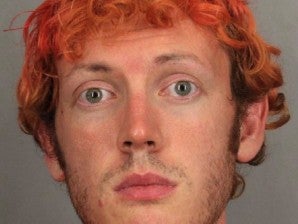 CENTENNIAL, Colorado — It was just hours after a Colorado movie theater shooting, and James Holmes was not acting like a man accused of methodically planning the attack that killed 12 people.

As a police detective interviewed the suspect they’d picked up outside the theater, he started pretending the paper bags on his hands — meant to preserve gunshot residue — were puppets.

The former neuroscience graduate student tried to jam a staple into an electrical outlet. He played with a cup on the table. An officer noted that his eyes were dilated.

The description came Tuesday as prosecutors try to show that Holmes should face a trial for the July 20 attack at a midnight showing of “The Dark Knight Rises.” He faces more than 160 felony charges for allegedly killing 12 and injuring 70.

Defense attorneys say Holmes is mentally ill, and have used their questions to try to make that point. They haven’t elaborated but have said they might call witnesses later in the week who could discuss Holmes’ mental health.

The description of Holmes after the attack, given by police detective Craig Appel, seemed to undercut prosecutors’ attempts to show Holmes as methodical, spending two months to assemble his arsenal.

He dyed his hair bright orange, then bought a scope and non-firing dummy bullets on July 1, the visit and the new hair color documented in security video.

Finally, he purchased glycerin and potassium permanganate — chemicals that could combine to create fire and sparks — from a Denver science store. At some point, he also improvised napalm, as well as thermite, a substance which burns so hot that water can’t extinguish the blaze.

Holmes’ purchases were split between two planned attacks, prosecutors said — the theater shooting and a booby trapped apartment that would’ve blown up if anyone had entered.

The bottle of glycerin was meant to fall into the permanganate when the door to his apartment opened, to cause an explosion and then a fire, prosecutors said.

The manager of The Science Company, Steve Grebe, confirmed the purchase, noting the amount was small and the materials are common in junior high experiments.

The setup in Holmes’ apartment had deadly potential, though. Parts of Holmes’ carpet were soaked with gasoline and oil and ammonium chloride, a white powder, was poured onto the floor in strips, FBI bomb technician Garrett Gumbinner said.

“It would have ignited and the whole apartment would have exploded or caught fire,” Gumbinner said.

He said the system had two other initiating systems. One was a pyrotechnics firing box that would have been triggered by the remote control unit of a toy car left along with a boom box set to play loud music. Gumbinner said Holmes told him he hoped the music would lure someone and lead them to play with the car, thereby detonating the explosives.

The other initiating system was a model rocket launch box which operated by means of infrared light, but Holmes told investigators it wasn’t armed, Gumbinner said.

The attempt at a distraction speaks to a plan to escape but the traps weren’t triggered. Holmes, clad from head to toe in body armor, was found standing by his car outside the theater. He told investigators that the booby trapped apartment was an effort to pull police away from the theater so, under that scenario, he wouldn’t expect to see police so quickly.

Police said he volunteered information about the booby traps. Authorities went to the apartment and carefully dismantled them.

Prosecutors also used Holmes’ dating website profiles to try to prove he knew the consequences of his actions. On two social networking websites — Match.com and FriendFinder.com — Holmes asked: “Will you visit me in prison?”

The Match profile was created in April; the FriendFinder account was opened on July 5. Holmes last accessed the sites two days before the July 20 shooting, detective Tom Welton testified.

As prosecutors lay out their case, Holmes’ lawyers have been asking questions throughout the hearing that suggest a mental health defense.

Attorney Tamara Brady asked Steven Beggs, an ATF agent who testified, whether there was anything to prevent “a severely mentally ill person” from purchasing things like chemicals, ammunition and handcuffs.

Defense attorney Daniel King asked Appel if Holmes was tested for drugs or other substances.

“I saw no indication that he was under the influence of anything,” Appel said.

Holmes’ lawyers could have waived the first public airing of the case against him, but legal analysts say they may see the mini-trial as a chance to gauge the prosecution’s case or tactics to prepare for a possible plea agreement.

Cases rarely advance to this stage without a judge agreeing to set a trial.

If Holmes is found sane and goes to trial and is convicted, his attorneys can try to stave off a possible death penalty by arguing he is mentally ill. Prosecutors have yet to decide whether to seek the death penalty.

If he’s found not guilty by reason of insanity, he would likely be sent to the state mental hospital, not prison. Such a defendant is deemed not guilty because he didn’t know right from wrong and is therefore “absolved” of the crime, said former Jefferson County District Attorney Scott Storey, who recently lost an insanity case.