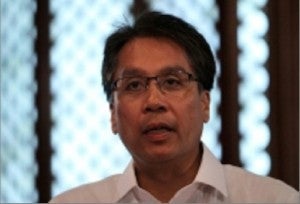 MANILA, Philippines–The Quezon Provincial director and 15 of his men were relieved from their posts for violating police operational procedures at the shootout in Atimonan, Quezon that killed 13 people  including 3 policemen and 3 soldiers last Sunday.

Interior Secretary Manuel Roxas and Philippine National Police Chief Director General Alan Purisima made the announcement at a press conference where they also disclosed the result of the fact finding investigation of the PNP.

Relieved were Senior Superintendent Valeriano de Leon and 15 of his men who wore civilian clothes at a checkpoint during the incident.

“We are still gathering information about the others,” Purisima said when asked how many others were involved.

Purisima added that there were lapses on the operational procedures committed by the police.

Some of the violations pointed by Purisima include:

But 500 meters before and after the main checkpoint, Roxas said, there was a signage and the police officers are wearing their uniforms.

“Actually [in the] situation police operational procedures were not followed. [There should be police vehicles] with visible markings. The personnel should be in uniform… So, practically based on the facts stated there is a violation of police procedures in the conduct of checkpoint,” Purisima said at a press conference.

Other findings of the PNP fact finding team include;

“So far these are facts as determined by the PNP fact finding body. They are still awaiting the submission of the lab reports, soco reports and they expect to finalize their reports for submission to Chief PNP by Friday this week, “Roxas said.

After that, he said they will transmit the findings to the Department of Justice and the National Bureau of Investigation.

“What the all this means, what will be the conclusion will be done by the NBI,” Roxas said.

Read Next
Black Nazarene procession nearing McArthur Bridge
EDITORS' PICK
EDITORIAL: To a bike-friendly future
The Best Tech Gifts For The 2022 Holidays
Is it safe to talk politics again at family gatherings? ‘The Reconciliation Dinner’ shows us what that’s like
House energy committee chair Arroyo bats for cheap electricity
vivo’s coming to town to grant wishes with more holiday promos
Pagasa: Warm, sunny Sunday in most parts of PH
MOST READ
LOOK: Vhong Navarro transferred to BJMP detention facility in Taguig
The Elephant Man in the Senate
Posh village as ‘shabu’ haven
LOOK: Zanjoe Marudo bonds with Ria Atayde, her family
Don't miss out on the latest news and information.