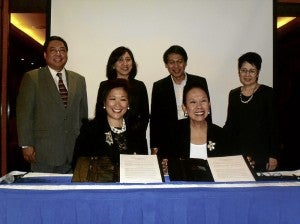 WINHOFFER and Licuanan show the signed agreement. Standing behind are CHEd officers and IBM executives. Stephen Norries A. Padilla/Contributor

A comprehensive master plan for analytics education for the Philippines’ higher education institutions will be developed to respond to an emerging global trend.

The plan will be a collaborative effort between the Commission on Higher Education (CHEd) and information technology giant IBM, which signed recently a memorandum of agreement.

CHEd is working with IBM in reviewing the existing academic curriculum and recommending courses to develop the necessary skills in the area of analytics.

The partners will also identify job opportunities to be created in key industries from the application of analytics.

A Smarter Education Consortium will be created, composed of representatives of the academe, government and industry, to act as an advisory council and consultative body on next generation education policies and reforms.

Mariels Almeda Winhoffer, president and country general manager of IBM Philippines, said,  “Analytics is a huge market opportunity globally. IBM has recognized the potential of the Philippines to be the global center for analytics due to its world-class human capital resource, growing technical skill, and proven success and experience in business process outsourcing.”

By the year 2015, the emerging global market opportunity for the analytics industry is estimated to reach $160 billion.

The new program will allow Filipinos to be trained specifically in the emerging trend of analytics.

“Stronger links with industry and technological innovations are essential for national development and progress,” said CHEd Chair Patricia B. Licuanan. “The government, several industries and companies, and key higher education institutions are collaborating in developing programs to train the future workforce in analytics.”

IBM chief technologist Lope Doromal Jr. explained that analytics was simply the “gathering of data and making sense of it to make more intelligent decisions.”

By analyzing patterns from all the data gathered in practically any field, Doromal said it would not only be possible for companies or organizations to describe events or cases at hand, but also to predict outcomes.

Doromal shared some best practices in Davao City where analytics was already being applied in public service. He said the city’s public safety program was “one of the more advanced in the country.”

He said Davao  had its own 911 system that connected different agencies in responding to emergency or crisis situations. The city also had an intelligence operation center that “provides a platform for us to get the data from the 911 call centers, from the police blotters, from other sources and consolidate all that information into a single portal,” Doromal said.

The single portal could then be accessed by personnel from the city government, who could use the information to respond quickly to crises, such as an accident, a crime or a fire, and to also make policies and plans to mitigate disasters, reduce risks and make future emergency responses faster and easier.

Licuanan, pointing out that data today were “expanding exponentially,” said they were a “powerful resource” that needed “proper organization and interpretation” by competent and highly trained individuals.

To produce more skilled analytics professionals or data scientists, CHEd plans to either craft a new college program for analytics or operations research, or include it as a special track within the curricula of business and information technology courses for academic year 2013-2014.

An international team of IBM volunteers was on a monthlong assignment with CHEd recently under the auspices of the IBM Corporate Service Corps (CSC) program.

The team has given its initial recommendations to CHEd, identifying ways to position the Philippines as an analytics education and technology hub in the region.

The CSC program, known also as the “Peace Corps” of IBM, was developed to help the company’s employees become effective 21st century global leaders and citizens while helping solve complex problems in developing countries like the Philippines.

“We share the same sentiments with IBM on how analytics can be the new game changer,” Licuanan said. “It allows organizations to make more informed and accurate decisions that will enable organizations to accurately anticipate and predict outcomes.”