S. Korean youth population to be halved by 2060 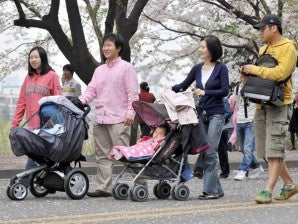 SEOUL – South Korea’s low birth rate means the size of its youth population – those aged between nine and 24 – will be slashed in half by 2060, a government report warned Monday.

The number of young people peaked at 14 million in 1980, accounting for 36.8 percent of the whole population, census data by the Ministry of Gender Equality and Family showed.

Since then, it has steadily declined and stood at 10.2 million last year, or 20.4 percent.

After years of promoting family planning in a crowded nation of 50 million, South Korea has become increasingly alarmed by its rapidly ageing society.

A rising welfare bill and a declining working population is seen as one of the most serious challenges now facing Asia’s fourth-largest economy.

By 2050, South Koreans aged 60 years or over will account for 39 percent of the population, up from 17 percent last year, according to the UN Department of Economic and Social Affairs.

South Korea’s fertility rate – the average number of children born to a woman over her lifetime – stood at just 1.01 in 2011, compared to the Organization for Economic Cooperation and Development (OECD) average of 1.71.