A NEWLY installed parking meter up close. Note that the inscriptions put the fee at P30 for the first two hours, but Manila Mayor Alfredo Lim asked the project’s private investor, Capital Wise Corp., during Friday’s launch to have it reduced to P20. The request was granted on the spot. PHOTO BY NIÑO JESUS ORBETA

The country’s first metered parking system was launched in Manila’s Chinatown on Friday, lending a touch of First World technology in a city of extreme contrasts where luxury cars and sport utility vehicles compete for space with jeepneys, pedicabs, and even the horse-drawn kalesa.

The meters, which are expected to be fully operational next week, will be installed initially on the major streets of Binondo, such as Quentin Paredes, Juan Luna, Madrid, Ongpin, Escolta and Benitez.

“The project aims to bring the City of Manila to the forefront of First World technology and help it achieve its goal of bringing progress to society,” said Freddie Fremista, business development officer of Manila Parking Management (Mapma).

Mapma is the operating arm of the project’s private investor, Capital Wise Corp.

Gracing the launch, Manila Mayor Alfredo Lim expressed hope that the parking system, which is similar to those used in cities in Europe and the United States, would help solve the perennial traffic problems in the Binondo district.

“This will be the pioneer project, if this will be successful and accepted by the people, we will implement it in other areas,” Lim said, noting that the system could help deter double parking and ease traffic flow.

“Any kind of change will encounter initial difficulties, but once people get used to it they will learn to adjust. It is for everyone’s benefit to simplify our traffic management,” Lim added. 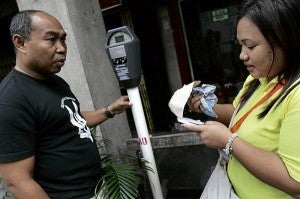 A FEMALE attendant explains to a motorist how to operate a newly installed parking meter in Binondo, Manila. PHOTO BY NIÑO JESUS ORBETA

The city government will have a share in the parking revenues, potentially to the tune of P10 million annually, Fremista said.

“The parking management shall not only install parking meters but also provide collateral services to ensure effectiveness,” Fremista said. “Street sweepers, roving mechanics and marshals (on bicycles and e-wheels) will be deployed to assist, provide security and enhance coordination with barangay officials.”

Motorists who wish to park on the metered zones need to have parking tap cards. The cards are “reloadable” and can be bought from Mapma’s roving attendants.

Once the vehicle is parked, the driver must swipe the card at the meter post and press the corresponding number of the parking slot. The same procedure goes for parking out.

“Don’t forget to park out so that your load will not be consumed,” Fremista said during the launch at Plaza Lorenzo Ruiz in Binondo, where he showed how to operate the Chinese-made meters.

If the motorist failed to pay or exceeded the parking time available in the tap card, the vehicle will be towed by the Manila Traffic and Parking Bureau.

The parking fee is P20 for the first two hours and P10 for every succeeding hour. A five-minute grace period before and after parking the vehicle will be allowed.

Some of the streets covered by the metered system will have 24-hour parking service, while others will allow parking only from 6 a.m. to 10 p.m. Security cameras will also be installed in the parking areas.