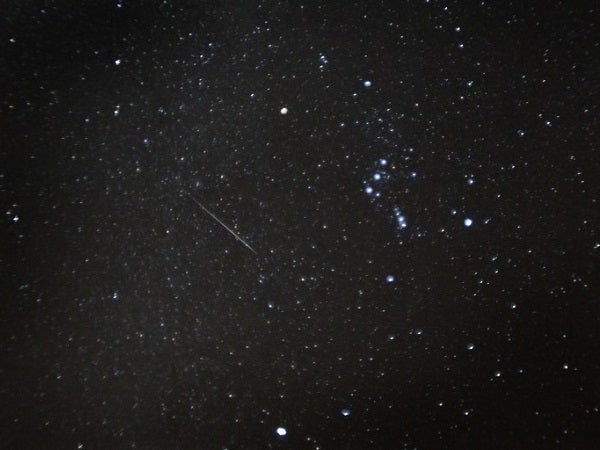 A general view of the Geminid meteor shower in the National Park of El Teide on the Spanish canary island of Tenerife on December 13, 2012. AFP/DESIREE MARTIN

Early birds will get the chance to see falling stars if they look at the sky in the wee hours of the morning.

If the sky is clear, the annual Quadrantid meteor shower, from Jan. 1 to 7, will be visible to Filipinos in the predawn hours, beginning at 2 a.m. until daylight, according to the Philippine Atmospheric, Geophysical and Astronomical Services Administration (Pagasa).

Dario de la Cruz, chief of Pagasa’s space sciences and astronomy section, said the meteor shower would reach its peak today (Friday), although it would still be visible until Jan. 7.

De la Cruz said the shower would be seen at a rate of at least 40 meteors per hour “practically anywhere in the Philippines,” although they may be obscured by clouds brought by the northeast monsoon or the passing Tropical Depression “Auring” in the south.

“The waning gibbous Moon on Jan. 3 will interfere with the meteor viewing. The shower will appear to radiate from the constellation of Boötes,” Pagasa Administrator Nathaniel Servando said in his monthly astronomical diary.

“The Quadrantid meteor shower hits the Earth’s atmosphere at the rate of about 40 kilometers per second. The incinerated dust are said to be particles apparently derived from the debris ejected by the near-Earth asteroid 2003 EH,” he added.

The next major meteor shower will be of the Lyrids in April. Lyrid meteors come from Comet Thatcher, according to the website of the US National Aeronautics and Space Administration (Nasa).

This will be followed by the Eta Aquarids in May, Delta Aquarids in July, Perseids in August, Orionids in October, Leonids in November and Geminids in December.

“The famous equilateral triangle in the sky, known as the Winter Triangle, rises after sunset,” Pagasa said.