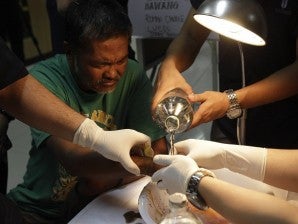 A Filipino is treated for firecracker injuries at the East Avenue Medical Center in suburban Quezon city, north of Manila, Philippines on Tuesday Jan. 1, 2013. Despite a ban by authorities on certain firecrackers due to injuries and death, many Filipinos still welcome the New Year with fireworks in the belief that it will drive away evil spirits and bring in good luck. AP/Aaron Favila

The number of people injured by firecrackers during the Christmas and New Year holidays rose Thursday to nearly 800, still about 21 percent lower than the total injuries reported last year, according to the Department of Health (DOH).

The latest DOH report said a total of 789 fireworks-related injuries had been reported as of 6 a.m. yesterday since the government began a count on

Of the 789 injuries, 765 were due to fireworks, 22 were caused by celebratory gunfire and two were firecracker ingestion cases.

The median was 15 years old, with 206 cases (27 percent) involving children under 10 years old, the department said.

“The most affected age group was 6 years old to 10 years old (207 cases, or 27 percent). Three hundred eighty six (51 percent) were passive users (or those who did not directly light the firecracker),” the DOH said.